Latest - The New Zealand women's team pursuit has broken the national record to qualify top of the rankings on the opening session of the track World Cup in Cambridge. 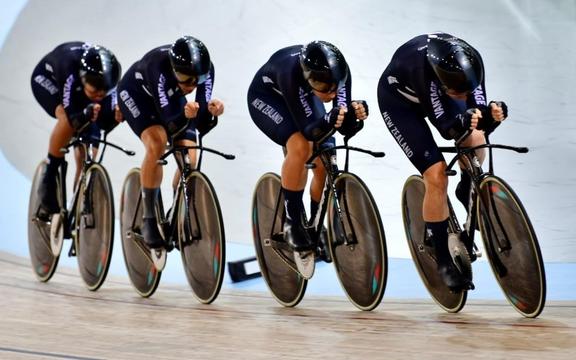 The combination of Kirstie James, Rushlee Buchanan, Holly Edmondston and Bryony Botha clocked 4:14.483 to top qualifiers, which broke the record of 4:16.028 that they set at the World Cup in Cambridge in January.

The Australian world champions, in their first hit-out in this campaign, were second fastest and will take on Canada in the first round.

New Zealand will rider against a New Zealand development combinationin the first round with the winners progressing to the gold medal ride.

The fastest two times from the two losers and the remaining four teams will compete for the bronze medal, both decided on the evening programme.

An Auckland Tuatara player and manager were ejected from their Australian Baseball League game against the Canberra Calvary at North Harbour stadium last night.

With the game locked at 5-all in the sixth inning American Josh Morgan let the plate umpire know how he felt about being struck out.

As a fired up Morgan left the field manager Steve Mintz came out of his dugout and argued with the officials but he quickly found himself joining Morgan on the outer.

It proved a turning point - the home team lost 7-5 after Canberra scored two runs at the top of the seventh inning.

Burling and Tuke in hunt in the 49ers

The Hyundai 49er, 49erFX and Nacra 17 world championships in Auckland might be halfway through but for New Zealand's top sailors the real business starts today. 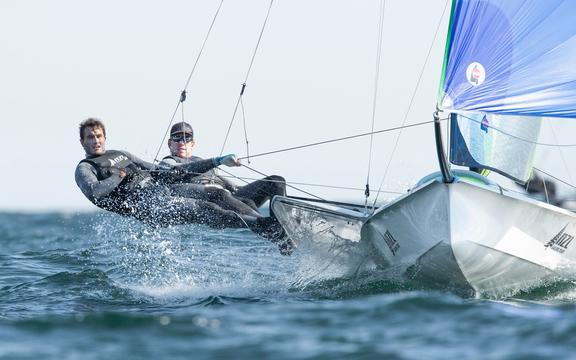 Peter Burling and Blair Tuke had another very solid day in the 49er, posting a first, third and seventh in their three races on the final day of qualifying yesterday to sit just one point off the lead.

They'll be joined in the top 25 boats by fellow Kiwis Logan Dunning Beck and Oscar Gunn (sixth) as well as Isaac McHardie and William McKenzie (22nd).

Alex Maloney and Molly Meech didn't have a particularly enjoyable day in the 49erFX as they dropped to seventh overall and lost some ground on the leaders.

Maloney and Meech are by no means out of it, especially as mistakes are magnified in gold fleet racing and the points can rack up quickly.

Liv Mackay and Jason Saunders in the Nacra 17 won two of their first three races yesterday to jump up the leaderboard before finishing 15th in their last race - they are now 11th overall.

Tokyo temperatures in July and August, when the city will host the Games, regularly exceed 30 degrees Celsius with high humidity adding to the discomfort.

The International Olympic Committee (IOC) has already moved the marathon, one of the most prestigious events at any Olympics, and race walk events 800 kilometres north to the cooler climes of Sapporo.

The decision angered Tokyo's local government as well as Games organisers, who had already been working on the events in the capital since being awarded the Games in 2013.

At the Tokyo 2020 triathlon test event in August, the sport's governing body was forced to reduce the distance of the run segment in the women's event because of heat concerns.

I will die trying to defend my title, says Ruiz Jr

World heavyweight champion Andy Ruiz Jr says he fulfilled a lifelong dream when he triumphed over Britain's Anthony Joshua in June and he would "die trying" to defend his belts in the title rematch in Saudi Arabia on Saturday.

"I have been doing this since I was six and it is finally paying off," Ruiz told the BBC. "There is no way I am going to let these belts go, I will die trying.

"It has been a roller-coaster and now that I made the dreams come true there is no way I will let these go."

Joshua has trimmed down ahead of the second WBA, IBF and WBO title showdown with an eye on taking the contest deep into the latter rounds, saying he expects a "marathon, not a sprint".

Joshua believes this will not be the last time the two fight each other and predicted a third bout in the future if Ruiz was up for it.

South African Mickey Arthur has been appointed as Sri Lanka's head coach on a two-year contract, the country's cricket board (SLC) said on Thursday.

The 51-year-old has enjoyed a more illustrious career as a head coach with the national teams of South Africa, Australia and Pakistan.

SLC appointed former fast bowler Rumesh Ratnayake as interim coach in August after a fallout with head coach Chandika Hathurusingha, who was criticised for Sri Lanka's exit at the group stage of the 50-over World Cup in England.

Arthur was recently released from his short-term Twenty20 contract with New Zealand side Central Districts.

He took charge of a mercurial Pakistan side in 2016 and led them to the 2017 Champions Trophy victory in the 50-over format and the number one ranking in the world in both tests and twenty20 internationals.

Pakistan, however, decided not to renew Arthur's contract following the team's failure to reach the semi-finals of this year's 50-over World Cup in England.

In his first assignment as Sri Lanka coach, Arthur will return to Pakistan this month for the two-match test series, starting from 11 December.

Formula One's governing body has ruled for tradition over technology when it comes to deciding the official end of a grand prix.

The FIA said in a statement after a World Motor Sport Council meeting in Paris that the waved chequered flag would be reinstated next season as the "definitive end-of-race signal".

Under new rules introduced this year, a digital chequered flag mounted on the starting lights gantry took precedence over the physical flag, which was still waved as before when cars crossed the finish line.

The digital display was blamed last October for the Japanese Grand Prix at Suzuka being ended officially a lap early.