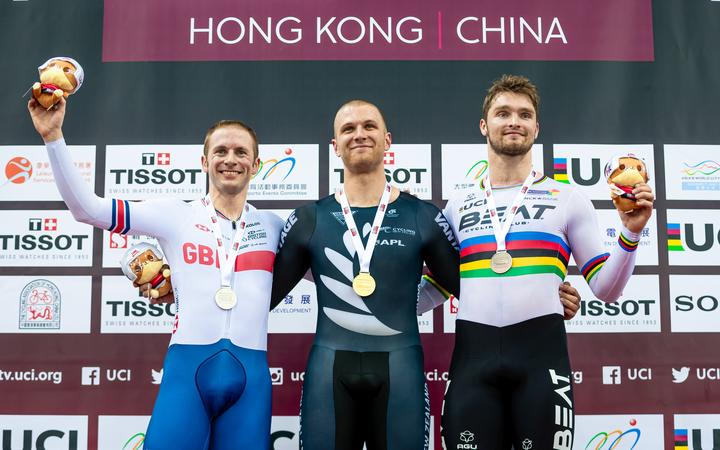 Saunders got the better of reigning Olympic champion Jason Kenny and current world champion Matthijs Buchli in the final.

Nicole Shields and Jessie Hodges have also claimed silver in the women's madison, while Michaela Drummond has just missed out on the medals in the women's scratch race, finishing fourth.

Saunders made the most of his opportunity.

One of the burgeoning young riders in New Zealand team under sprint coach Rene Wolff, Saunders only got to ride in the individual events with the team sprint trio having returned to Cambridge to prepare for their home World Cup this week.

The competition was stacked with the current Olympic champion, and current keirin and sprint world champions along with 11 of the world's top 20 ranked keirin riders.

No surprise then that Saunders could only place third in his heat to send him into a winner-take-all repechage, but he held off a strong group to win and progress to the semifinal.

There he drew the No 1 spot to slot in behind the derny and while swamped early when the pace went on, he recovered around the outside to edge his way into third place in a bunch sprint to claim the last place in the final.

He again drew the No 1 slot for the final with Olympic champion Kenny behind. This proved a key because when Kenny opened up his sprint to push to the lead with two and a half laps remaining, his speed was such that the Marlborough rider maintained his place in the trail.

Saunders held off the threat by world number 2 ranked Malaysian Mohd Awang on his outside and in the final straight the New Zealander pushed past Kenny for the win with world champion Buchli flying home for third.

"We are all absolutely thrilled for Callum and Rene who has worked so hard with our development sprinters. This is a reward for their hard work and our belief to give our young riders their opportunity at this level," Cycling New Zealand High Performance Director Martin Barras said. 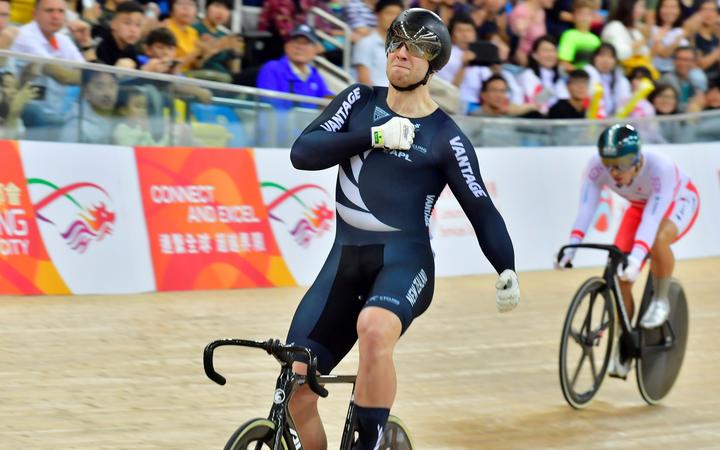 Campbell Stewart, still just 21 years, was sixth in the opening scratch race and fourth in the tempo race, where there are points on every lap. He took out his favoured elimination race, where the last rider is eliminated in sprints every two laps until a final two-rider match race.

This left him with a two-point lead on Kluge going into the final 25km points race, with Stewart biding his time, going with a group to put a lap on the field for the 20 point bonus and winning three of the last five sprints.

He secured the overall honours on 142 points with Kluge on 133 and Switzerland's Thery Schir third on 125.

"Campbell is an outstanding young rider who has worked so hard in the last few months and is in great shape. He matches that with his cycling intelligence which greatly belies his years," Barrais said.

There was also excitement for a new combination of Shields and Hodges in the 30km madison, which is scored like a points race but involving two riders, with one in play at all times via a hand-sling between them.

Both Shields from Alexandra and Hodges from Hamilton were part of the winning team pursuit 24 hours earlier.

The New Zealand pair was sixth at the midway point with the Danish pair winning three of the opening six sprints.

With no teams able to get a lap on the field, the Vantage New Zealand combo showed their strength to win the fourth to last sprint, place second in the penultimate sprint and then win the final double points dash to secure second placing.

Earlier Natasha Hansen started her international season qualifying ninth in the sprint in 10.918s, winning her first-round match sprint against Lithuania's former world champion Simona Krupeckaite in the first round but eliminated by Olympic team sprint gold medallist Tianshi Zhong (China) by just 3/100ths of a second in the second round.

Fellow Kiwi sprinter Ellesse Andrews qualified 25th in 11.190s but lost to Zhong in the opening round.

The final day of competition includes Saunders in the individual sprint, Hansen and Andrews in the keirin, Michaela Drummond in the omnium, Stewart and Tom Sexton in the madison and Corbin Strong in the scratch race.

The focus then shifts to home territory with the fourth round of the World Cup in Cambridge, starting this Friday.