Jofra Archer's England teammates will rally round the fast bowler after he reported being racially abused by a spectator during the first test loss to New Zealand, says team director Ashley Giles. 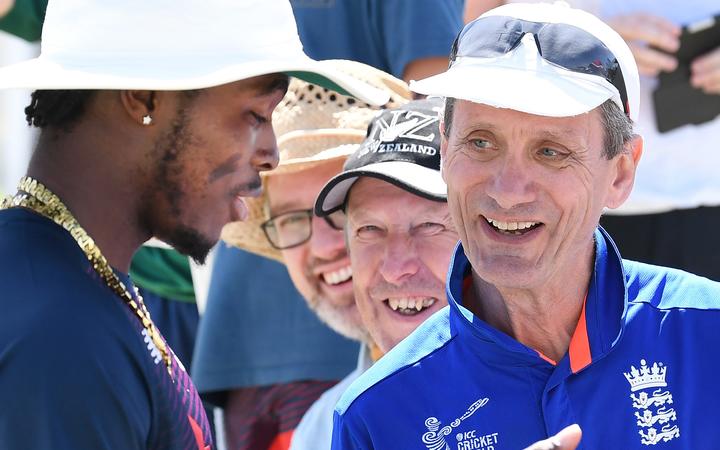 New Zealand and England cricket officials are investigating the incident which happened on day five of the first Test at Bay Oval in Mount Maunganui and Archer made public on Twitter.

"It's a shame that sort of thing is still in our society. There was something said from the crowd, from the scoreboard area, which was offensive.

"Jofra reported this to the steward immediately as he came off. He also reported it to our security as he got back into the changing-rooms. The sense was that it was a racist abuse."

Archer, who was born in Barbados and represented West Indies at Under-19 level, scored 30 runs to delay New Zealand's innings and 65-run victory in the first test on Monday.

The 24-year-old then took to Twitter to say he found it "a bit disturbing" to hear the racial insults.

"The tweet that went out was obviously emotional. It hurts," Giles added.

"We fully support Jof - there is no place for racism in the game, in any team. Jof is part of our team. Whatever the abuse, we'd be absolutely right behind him.

"You know what our team is like, they'll rally round him pretty well but it's a serious incident. He's a young man making his way in the game and we don't need this sort of thing."

New Zealand Cricket said in a statement that venue security had been unable to locate the alleged perpetrator but that the investigation would continue and the board would seek out Archer to apologise.

"They are incredibly concerned that this has happened on their patch. We believe it's an isolated incident but we'll know more once the investigation is finished.

"They're working very hard to find the culprit. I'm hopeful they will find out who did it."

New Zealand Cricket have also promised increased vigilance for the second and final test in the series, which begins in Hamilton on Friday.

"It's a good series and played in the right fashion and one person should not ruin that but it's a shame that sort of thing is still in society," Giles said.