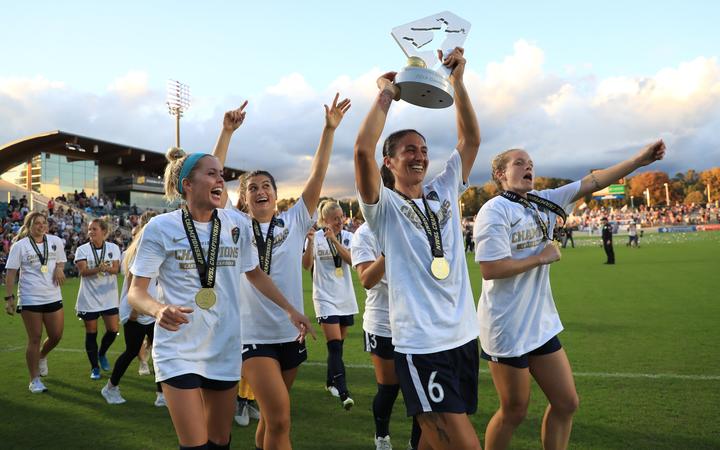 Erceg captains the Courage and played the full 90 minutes as North Carolina beat the Chicago Red Stars 4-0 in the grand final, after leading 3-0 at half-time.

The 29-year-old played a key role in limiting Chicago's Australian striker Samantha Kerr, who's the top goalscorer in the league's history.

The Courage, who were the best team in the regular season and topped the standings five points clear of second-placed Chicago, coped best with the heat and humidity in front of a sell-out crowd of 10,227 fans at Sahlen's stadium.

Brazilian midfielder Debinha gave them the perfect start when she fired home after four minutes before striker Jessica McDonald doubled their lead with a header 22 minutes later.

Crystal Dunn completed a dominant first half when she battled her way through the Chicago defence to score the third on the stroke of half-time.

Samantha Mewis completed the rout with a header after 61 minutes.

The Courage became the second club in National Women's Soccer League history to win back-to-back titles and the first to win the league in front of their own fans.

It's Erceg's third National Women's Soccer League title in four years, having also won the crown with the Western New York Flash in 2016.

Thomas was shown a straight red card for an over-the-ball challenge on Norwegian midfielder Fredrik Midtsjo in the 22nd minute of PSV's 4-0 loss to AZ Alkmaar.

"It was 100 percent a red. I apologised to him [Midtsjo] straight away, I knew it wasn't something I would normally do," Thomas said.

The 24-year-old had been on the sidelines following knee surgery for anterior cruciate ligament damage that saw his miss a season with PSV.

Thomas had come off the bench for PSV earlier in the Dutch Eredivisie season but will now sit out at least one game for the red card.