The Silver Ferns have beaten Australia 53-52 in the first Constellation Cup test in Christchurch, the first time in four years New Zealand has achieved back to back victories over their old rivals. 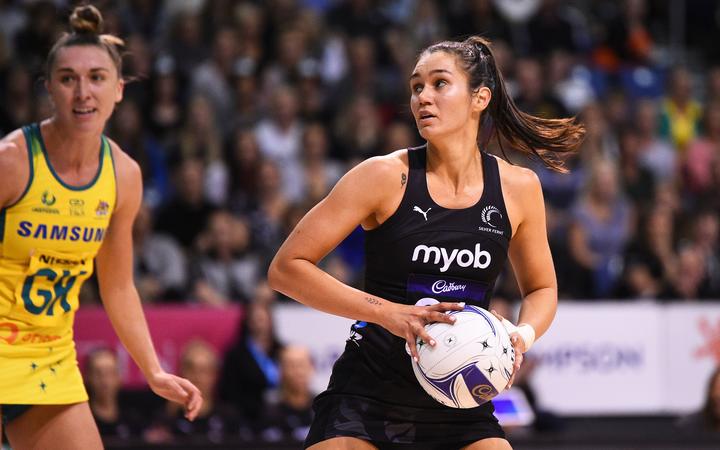 It comes off the Ferns stunning one goal victory over Australia to win the World Cup final in July.

There were moments in the final quarter that mirrored that World Cup final, none more so than when the Silver Ferns played the ball around as the clock ran down.

The momentum changed a few times but the Diamonds looked dangerous when they won the third quarter by six goals, heading 44-39 into the final quarter.

At that point Silver Ferns coach Noeline Taurua rolled the dice, bringing on Karin Burger at goal defence for Pheonix Karaka as she tried to nullify goal attack Gretel Tippett.

The pendulum swung again as the Silver Ferns started chipping into the Diamonds lead, and mistakes crept into the visitors' game.

The Ferns squared things 46-all.

Australian coach Lisa Alexander then brought Caitlin Thwaites on for Caitlin Bassett at goal shoot, as the captain left the court in some discomfort.

From then on the game was essentially a goal for goal affair but a Jane Watson deflection broke the deadlock and was converted by Ameliaranne Ekenasio at the other end to put the Ferns in front.

A few plays later Ekenasio missed just her second shot of the game, and Australia levelled with 2 minutes to play.

But Burger got down for a low ball to get the crucial turnover which was then nailed by Ekenasio and it was a matter of retaining possession as the final buzzer sounded in a repeat of the World Cup final.

As she did at the World Cup, Ekenasio played a crucial role at goal attack, scoring 29 from 31. Maria Folau at goal shoot played her part putting up 24 from 26.

Taurua started Karaka at goal defence as the Silver Ferns get used to life after Casey Kopua, while Katrina Rore started at wing defence after being a revelation in that position at the world cup.

There wasn't much between the sides in the first quarter and the Silver Ferns finished with a 13-11 lead.

In the second quarter New Zealand started pulling ahead as the Ferns made the most of their turnover opportunities.

Goal keep Jane Watson started to look threatening and forced some mistakes from the Australian shooters. Goal attack Gretel Tippett picked up three offensive penalties in the first half.

The Silver Ferns pulled away to a 5-goal lead early in the second quarter but the Diamonds chipped away at that lead and closed strongly to trail New Zealand by just one 26-25.

Near the end of the first half Australian midcouter Laura Scherian became the oldest Diamonds debutant at the ripe age of 31 when she replaced Liz Watson at wing attack.

At half time Liz Watson came on for Paige Hadley at centre.

The third quarter became a war of attrition as the sides went goal for goal for large parts of the period.

But Australia nudged ahead with 5 minutes to go after forcing a held ball.

The Diamonds also found more flow on attack and took a six-goal lead. Scherian made the most of her debut, turning on the speed to find gaps on the circle edge.

Australian defender Jo Weston was disruptive picking up a lot of deflections while the New Zealand shooters were guilty of not punching forward for the ball at times.

The second Test is in Auckland on Wednesday.