Moments after setting a new lap record, runaway Supercars series leader Scott McLaughlin has ominously warned he can go even faster in Friday's Bathurst 1000 qualifying if forecast rain stays away. 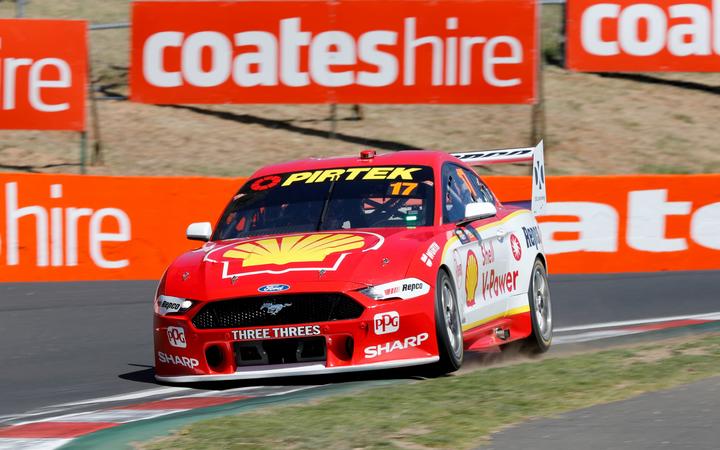 Ford gun McLaughlin fired a warning shot ahead of the Great Race, taming Mount Panorama with a new lap mark on an incident-packed opening day of Bathurst 1000 practice.

McLaughlin made his intentions clear he was hungry to claim a maiden Bathurst title by clocking a blistering two minutes, 03.77 seconds on Thursday.

McLaughlin claimed he had adopted a "win it or bin it" approach before arriving at Mount Panorama in a bid to break his Bathurst duck and complete his glittering resume.

His sole focus is on the Great Race after grabbing a remarkable 598-point series lead, ensuring he can crash out in the next two rounds and conceivably still top the championship.

And he backed up his words on Thursday, laying down the gauntlet before Friday's qualifying session.

In a scary thought for rivals, McLaughlin hoped to go even faster - as long as the track remained dry.

"It's bloody cool. I was just holding on. It so quick across the top (of the mountain) now but I had a lot of fun (breaking record)," said McLaughlin, who is partnered with co-driver Alex Premat at Bathurst.

"Hopefully tomorrow the rain holds off and we can have another crack in the dry and see what happens.

"I am sure it is going to be faster if it stays dry."

But the New Zealander knows it only takes one mistake to come undone on the mountain - as several drivers learned the hard way on Thursday.

The field for the third one hour practice session was missing the Holdens of former Bathurst winner David Reynolds and wildcard entry Brodie Kostecki which remained in the garage after practice crashes.

Holden young gun Macauley Jones was officially Mount Panorama's first scalp in the opening session, hitting the concrete wall at The Cutting so hard it loosened the roof.

Jones emerged unscathed but his team couldn't put the Commodore back together again in time for his co-driver Dean Canto to contest the second session, only to emerge with a patched up Holden in third practice.

He clocked the eighth fastest time in the second one hour session which was reserved for co-drivers.

"It was nice to get back out there. It was not perfect but I was getting back into the swing of things," said Lowndes.

"It's nice to be back around the mountain."

Two more practice sessions will be held on Friday before qualifying starts at 4 local time.