Canberra bosses feel vindicated for sticking by coach Ricky Stuart but insist it wasn't the difficult decision it may have seemed. 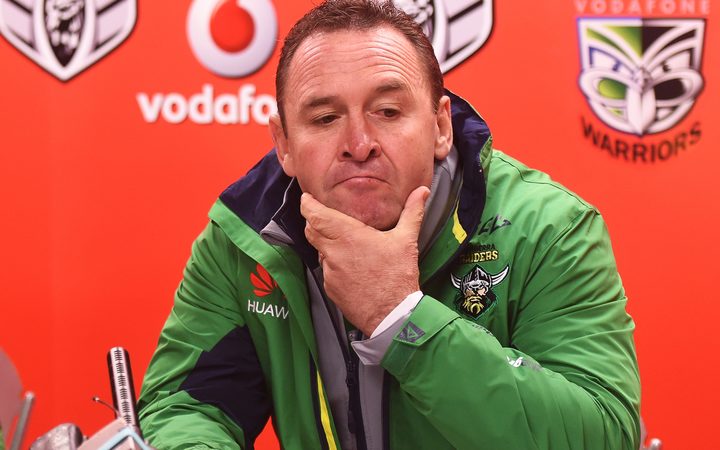 Few in rugby league divide opinion like Stuart and there were calls for him to be sacked after the Raiders missed consecutive NRL finals series in 2017 and 2018, having reached a preliminary final in 2016.

Instead, the board extended his contract this season and if Stuart sees it out he'll become the longest-serving coach in Raiders' history.

Raiders CEO Don Furner says their first grand final in 25 years, against Sydney Roosters on Sunday, is reward for their faith in the former halfback who'd helped them to three titles in six years as a player.

While he secured a title in his rookie year as a head coach at Sydney Roosters and went on to coach Australia and NSW, Stuart arrived back at Canberra after tumultuous stints at Cronulla and Parramatta.

But ask anyone inside the Raiders about Stuart and the first thing they mention is his relationship with the players. Almost all of them consider him a father figure.

"He's one of the few coaches that can have a beer with his players but also make the tough calls and keep their respect, not many can do that," Furner said.

"His man-management is superb. It's difficult, you've got to look someone in the eye and drop them but still make them feel like they're a part of the team.

"You've got to deal with all their emotions and it's not easy, but Ricky manages it. In my experience, not many coaches can do it like Ricky."

Despite Stuart making finals just once in his first five seasons at the club, Furner always felt he had the club on the right track.

"If there are injuries or off-field problems or a player gets suspended, there are so many things outside your control that can go wrong.

"So if you know what he's doing in the background and you know his rapport with the players then you know where the club is really at.

"We showed faith in him and some clubs don't."

"We lost six or seven games by less than two points. We just lost those close ones and that made a massive difference, the margins in the NRL are so small."

Co-captain Jarrod Croker has ridden the highs and lows at the club since his debut in 2009 and says nobody deserves a Raiders premiership more than Stuart.

"He's always been the man for the job. He's copped it, we've all copped it and that's the game we're in, so I'm just happy for Stick," Croker said.

"He's been coaching here for a long time but he's been a Raider from day one. He deserves this."

Fellow co-captain Josh Hodgson believes Stuart has been more open to advice from seniors players and staff this season and reaped rewards on the field.

Lazarus said there was no doubt Stuart had developed as a coach but emphasised his central values hadn't changed since his ultra-competitive playing days.

"To be a successful club you've got to have the right people and attitudes and be prepared to buy into what's being preached," Lazarus said.

"Ricky has developed as a coach but his core values and attitudes towards playing footy haven't changed. Nobody hates losing more than Ricky Stuart.

"This year they've got a bunch of guys that just want to play for him. They just love him and want to win for Ricky.

"There were a lot of people that were quick to write him off but Canberra to their credit have given him the latitude and space to build a team and he's instilled a great culture.

"He's got them into a grand final which a lot of people wouldn't have thought at the beginning of the year. He's built a team that just goes out and puts in week in, week out.