The New Zealand Under 23 football team has beaten Solomon Islands 4-0 in the final of the OFC men's Olympic Qualifier in Fiji to secure Oceania's lone spot at next year's Tokyo Games. 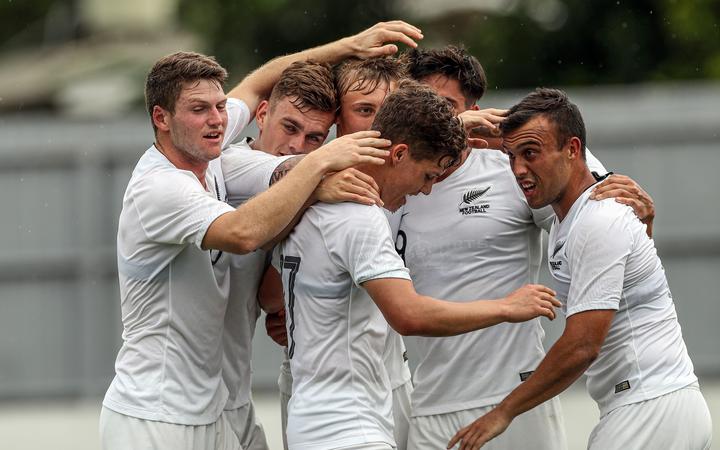 Members of the New Zealand Under 23 football side celebrate during their match against Solomon Islands in Fiji. Photo: OFC Media via Phototek

It means New Zealand will now have two football teams at the Olympic Games after the U-23 men's national team joined the Football Ferns in booking a ticket to Tokyo.

Des Buckingham's side had dominated the qualifying tournament in Fiji and underlined their superiority in the final this afternoon, overcoming the Solomon Islands 5-0 to deservedly earn regional bragging rights and secure an Olympic berth in the process.

The sides had met in their final group game last Friday and it was a thriller on that occasion, the Kiwis triumphing 4-2 in an absorbing encounter. They again found the net multiple times this afternoon at Churchill Park in Lautoka but the Solomons could not get close to them this time and the outcome did not look in doubt by the time the half-time whistle was blown.

New Zealand had charged out of the blocks in their semi-final victory over Fiji to effectively win the match within 30 minutes and they did likewise today, again racing into a three-goal lead by the half-hour mark.

Captain Logan Rogerson led by example to open the scoring early on, pouncing on a loose ball after Clayton Lewis had released Ben Waine down the left and it took just 20 more minutes for New Zealand to find a second, Myer Bevan following up after neat interplay between Lewis and Rogerson.

New Zealand had one foot in Tokyo soon after as Waine was teed up by Rogerson, the move having been started by a quick free kick from Gianni Stensness.

The Solomon Islands were never likely to come back from three goals down against a side yet to taste defeat in this tournament and so it proved as New Zealand confirmed their Olympic berth with two more goals in the second half.

Golden boot winner Bevan struck his 12th goal of the tournament with 20 minutes remaining from a well-worked free kick routine with Lewis and it looked like that was the end of the scoring as the match entered stoppage time. But defender Billy Jones then popped up to head in yet another Lewis free kick as New Zealand signed off on their time in Fiji in style.

"I just said to the boys that that final was the perfect game," Buckingham said.

"To win a final 5-0 against a very good Solomons team and put New Zealand into the Olympics for only the third time in history is a huge achievement for this group," he added.

"I can't quite put it into words, it's an unbelievable feeling right now. It's very emotional but I'm very pleased and proud for the playing group, and not just the 20 that we here but the 70 or 80 that have been part of this journey and will continue to be part of it over the next eight or nine months."