Patrick Bevin is trying to stay upbeat after coming agonisingly close to becoming the first New Zealander to medal in an elite men's event at a World Road Cycling Championships. 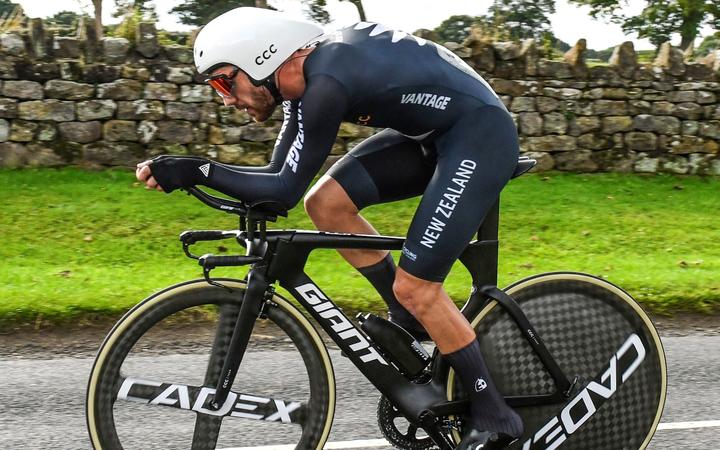 NZ cyclist Patrick Bevin on his way to fourth in the time trial at the 2019 World Road Championships. Photo: ROB JONES/CANADIAN CYCLIST

The 28-year-old from Taupo had to settle for fourth in the individual time trial in Yorkshire on Thursday (NZ time), finishing just 2.16 seconds off the podium.

It was, though, still the best result by a Kiwi cyclist in a elite men's event, while he also marked himself as a genuine contender for next year's Tokyo Olympics.

Understandably, Bevin had mixed feelings about his effort.

"Honestly, it's still a bit disappointing. We came in with the goal of a medal and to kind of just miss that [is disappointing].

"But at the end of the day, ultimately, it was a good ride. It was an improvement, I've gone from eight to fourth so I've got to take some positives out of that.

"It was a good day. It's a positive result, it's a good result, it's fourth in the world so we'll take that."

The CCC Team professional's performance over the 54km test was a further progression from his eighth placing at last year's world championships in Austria.

Australian Rohan Dennis outclassed the field to retain the title he won last year, more than a minute ahead of Belgian Remco Evenepoel, with Italy's Filippo Ganna in third.

Bevin was ninth fastest overall through the first time-check but by the 37.7km point he was within 1.3 seconds of the top three.

He and Ganna retained almost the same pace over the final 16kms to the uphill finish in Harrogate.

Bevin was proud of his effort after a challenging 2019 with a revamped team and broken ribs from a crash that forced him out of the Tour de France.

"This has come at the end of a trying year.

"It was good that I could bring it all together and finish well after breaking my ribs which really put a hole in the year.

"The biggest positive is that I managed to navigate the adversity that is cycling and come back out here and have a big performance. I can take a lot of heart out of that."

Bevin's final race of the year will be this weekend's World Championships road race, before a well-earned rest and time to plot his plans for the Tokyo Olympics.