Cameron Leslie wants to compete in two different sports at next year's Tokyo Paralympics, having shown he can be successful at the highest level in both swimming and wheelchair rugby. 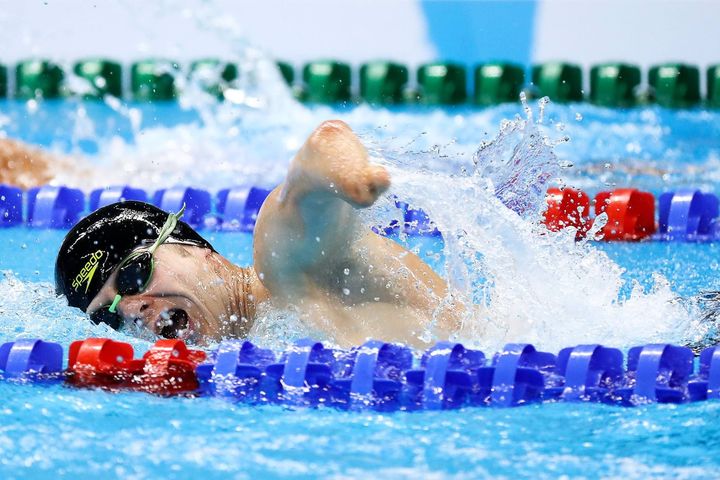 Leslie, 29, has won a fifth world title at the World Para Swimming Championships in London to add to the three Paralympic golds he's taken home from the Beijing, London and Rio Games.

He's surprised himself to win the men's 50 metre backstroke S4 division, with his previous four world titles all coming in medley events.

The achievement is even more remarkable, given Leslie only arrived in London 48 hours earlier, after having helped the Wheel Blacks qualify for the Tokyo Paralympics, by finishing third at the Asia-Oceania wheelchair rugby championship in Korea on Monday.

"It's been a pretty hectic week," Leslie said.

"Training for wheelchair rugby and swimming is just part of what I do week to week so no issues there.

"But balancing being in Korea with the rugby team, while the swim team are preparing in Bath is a very different feeling.

"And challenging to come in after the competition started and then have to just get focussed straight away and get on with the job.

"Definitely challenging for me, but I guess as an athlete who's been around for a while it's something I've been confident I could do."

Leslie never considered skipping one or the other.

"So it's awesome to see them qualify and be part of that as well, but also I love my swimming and I love winning." And Leslie wants to juggle both in Tokyo next year.

"That's definitely the plan. It's been a goal of mine for a long time now so hopefully we can make both work.

"The schedules are out but I haven't looked at them to see if logistically it all works yet. I've been very focussed on just getting the job done first before we start looking at that sort of stuff."

Leslie sat out his premier event at the World Para Swimming Championships to ensure he could be at his best.

"That was a bit of a tactical move," he said.

"Having come in from Korea the night before we didn't think it was going to be in a smart move to jump in the first day after hopping off a 12 hour flight to get into a tough race like that.

"We saw today a little bit of a reward for putting some thought in beforehand to be smart with what races we target."

"We're coming off the back of wheelchair rugby which are hour and a half games so fitness is definitely there."