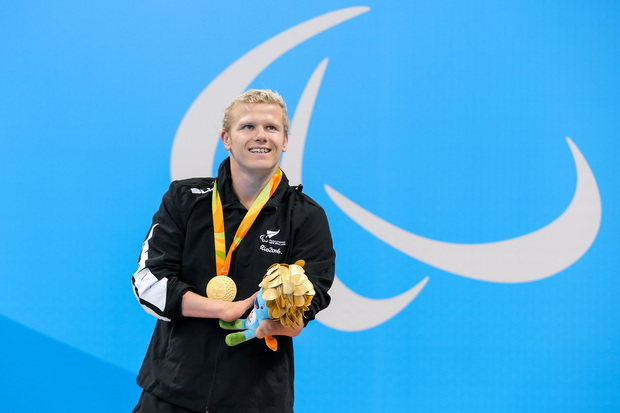 Leslie set a new Oceania record of 42.13secs in the final, after only setting the third fastest time in the heats.

The 29-year-old is a three-time Paralympic gold medallist, but those have all come in the men's 150 metre individual medley SM4.

He finished eighth in the men's 50 metre backstroke S5 in Rio.

Leslie set a time of 43.52secs in his heat, two seconds behind Russia's Roman Zhdanov, who set a new world record.

But Zhdanov was unable to reproduce the swim in the final and had to settle for bronze behind previous world record holder Arnost Petracek of the Czech Republic.

"I was really surprised the Russian guy in lane four didn't go so well.

"He broke a world record in the morning and in the evening he didn't go so well, but that's international racing. You've got to be able to step it up in the evening and race when it matters."

Leslie was the only Kiwi in action on day four of the championships and has taken New Zealand's medal tally to five, with four golds and a silver.

Leslie will be back in the pool tonight in the men's 50 metre freestyle S4, before competing in the 200m event the following day.