The New Zealand men's basketball team has dramatically kept alive its hopes of qualifying for next year's Tokyo Olympics by beating the much higher ranked Turkey 102-101 in a thriller in Dongguan. 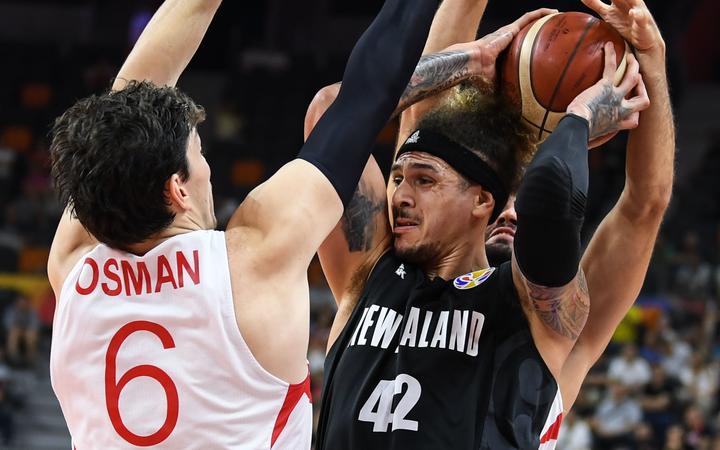 The Tall Blacks stunned the European giants in their final classification game at the Basketball World Cup in China to secure a spot at an Olympic qualifying tournament next year.

It's New Zealand's first ever win over Turkey and was made possible by six Tall Blacks scoring double digits.

Rob Loe and Isaac Fotu led the side with 17 points each.

The plan under head coach Paul Henare at the tournament was to run at pace, space the floor and create open looks for a team of shooters, 'bigs' included.

That game plan had earlier forced heavyweights Brazil and Greece to close games but last night it turned in the Tall Blacks favour, securing a top 20 finish and a shot at the Olympic Games repechage next year.

The win was built on a wide reaching offensive effort, with Loe named man of the match for a display that included one handed put back dunks, three rebounds, four assists and his trademark shooting from deep, ending with 17 points including 3 of 5 from downtown.

The support cast was extensive with Fotu posting 17 points and 5 boards, and young Finn Delany coming alive for a breakout performance at this level with 12 points and 7 massive rebounds.

The power forward found his hops and his confidence in an aerial display that wowed the crowd and quietened the Turks, spending much of this time at altitude above the rim.

Tai Webster had 12 points, three boards and three assists while the tournament's leading scorer Corey Webster also had 12 and dished off five dimes as he was often shut down by the Turkish scout.

"Unreal. I am a little bit lost for words, not just for that result but in the greater scheme of things, what that says about our programme and what we have done throughout this tournament. I am so proud of this team, for their fight and the commitment to play the way we want to play, to be able to do it on this stage is just unbelievable.

"I haven't looked at the box score yet, but I think we had five or six guys in double figures and a couple of others with nine, we literally had everyone step up and play their roles well. That has been a strength of our group, Corey and Ike have had great tournaments but we needed everyone today and I am really happy for them all," said Henare.

Henare said Delany was huge, grabbing vital rebounds and dunking at will.

"He was amazing, the energy he played with was at a time when we needed it, at a time when we could sense a shift in momentum with the Turkish guys - you could see the fatigue hitting them. He saved his best for last, I am really happy for him."

Henare was also pleased that the game plan paid dividends.

"It has been a little bit experimental to start with but the way the guys have bought in to way we are playing and for it to come to fruition today on such a big stage - with our Olympic hopes on the line. Let's not dance around the fact we didn't achieve our goals but we still had plenty to play for, against a top ten team in the world in what is the first time we have ever beaten Turkey as far as I can remember, there is just so much there."

Captain Tom Abercrombie was huge on defence grabbing six rebounds, three assists and also finding some airtime with many of his 11 points at the rim.

"I am just so proud of the boys, we deserve that finish to the tournament after the earlier close defeats, for all the hard work that everyone has put in and the time away from our families and supporters back home, it is a great feeling.

"On a personal level that means so much to me, I have played Turkey so many times without ever tasting victory, to do so here on the World Cup stage is amazing for us as a team, but also puts us right in the picture to grow from this and compete with the best in the world," Abercrombie said.

New Zealand came in with a world ranking of 38 and will officially finish 19th at the tournament with three wins and two losses, as one of four pool winners in the classification stage, with just points differential separating them from other winners Nigeria and Germany.

They will now turn their attention to Asia Cup qualifying and the Olympic repechage tournaments next June. Twenty four teams will play in four tournaments, with just the tournament winners booking a place in Tokyo.

Meanwhile, holders United States romped into the Basketball World Cup knockout rounds with an 89-73 win over Brazil and booked a quarter-final clash with France, who were edged by Australia 100-98 in a thriller.

The US win over Brazil also sent the Czechs through to the last eight despite their 84-77 defeat by Greece but they now face a daunting clash with the Australians, who stretched their perfect record to five successive wins.