Australia has retained the Ashes after beating England by 185 runs in the fourth test in Manchester to take a 2-1 lead in the series with just one test remaining. 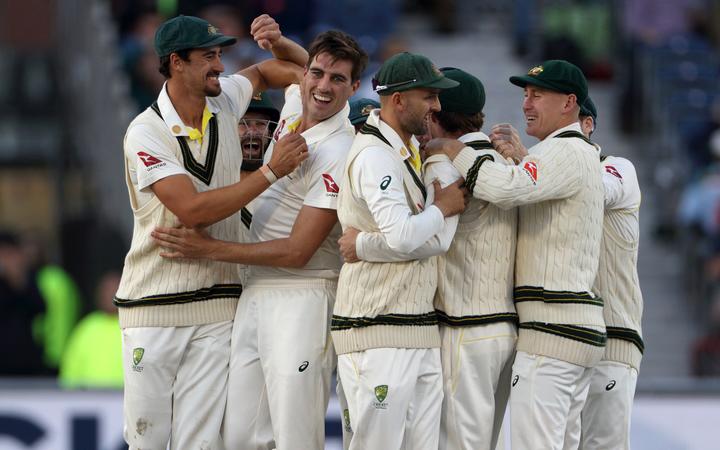 England, who resumed the day on 18-2, were bowled out for 197 on the final day with Australia seamer Pat Cummins taking four for 43.

Australia's victory, with 81 balls remaining, was a convincing one but England's spirit cannot be criticised as they fought until the final hour in their attempt to save the test and keep the series alive.

The tourists lead 2-1 going into next week's final test at The Oval where they hope to become the first Australian team to win an Ashes series in England since 2001.

Steve Smith, whose magnificent double century and then second innings 82 were a major factor in this win and whose batting throughout the series has ensured the Ashes remain in Australian hands, was delighted.

"It feels amazing to know the urn is coming home. I've been here a few times when things haven't gone our way. This was always one to tick off my bucket list. It's extremely satisfying," he said.

The main early resistance from England came from Joe Denly who made 53 from 123 balls and Jos Buttler, who lasted 111 balls for his 34.

England's hopes of an unlikely escape-act rose when Jack Leach and Craig Overton batted for over an hour giving the crowd belief over a second 'miracle' after the comeback win at Headingley.

But part-time leg spinner Marnus Labuschagne finally removed Leach, with a ball that turned sharply in the rough and was gloved to Matthew Wade at short leg.

Overton batted with sense, stoicism and a strong technique, but he was trapped lbw by Josh Hazlewood to set off the Australian celebrations.

"I didn't think it would be this emotional," said Australia captain Tim Paine.

"The amount of work that's gone in to retain the Ashes has been enormous and I'm really proud of this group and how we bounced back from Headingley," he added.

England captain Joe Root told the BBC: "I'm bitterly disappointed. I thought the way we fought today, the character we showed, every single one of them can be proud of that today.

"To come so close to taking it to The Oval is hard to take. We've still got to look forward and make sure we level the series."