New Zealand's Michael Venus and his Chinese Taipei Hao-Ching partner have been beaten in straight sets in the mixed doubles final at the US Tennis Open in New York.

England's Jamie Murray and American Bethanie Mattek-Sands defended their title with a 6-2 6-3 win.

Venus and Chan also finished runnersup to Murray in the 2017 final in New York with Murray playing with Swiss great Martina Hingis on that occasion. 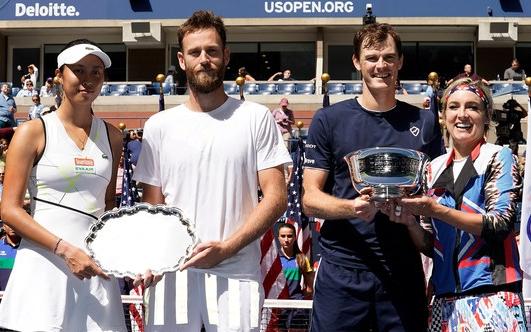 A break of the Venus serve, courtesy of a stunning Mattek-Sands return, gave the Glasgow-Minnesota alliance the early initiative.

Murray's instinctive volley then secured the double break and the opening set was wrapped up in 27 minutes.

Mattek-Sands' presence had ensured the backing of the home crowd on Arthur Ashe, and they roared with delight when her backhand return whizzed past Venus on championship point.

The colourful American whipped out her phone to take a selfie with her partner as they celebrated a dominant win.

"It's easier playing on the big courts, I know Beth loves it, playing in front of lots of people and she played an amazing match.

"She says I'm the yin to her yang. We're really happy to win again."