Steve Smith has picked up where he left off, marching Australia to 170/3 at stumps on day one of the fourth Ashes Test at Old Trafford to frustrate England with the help of some wet and windy weather. 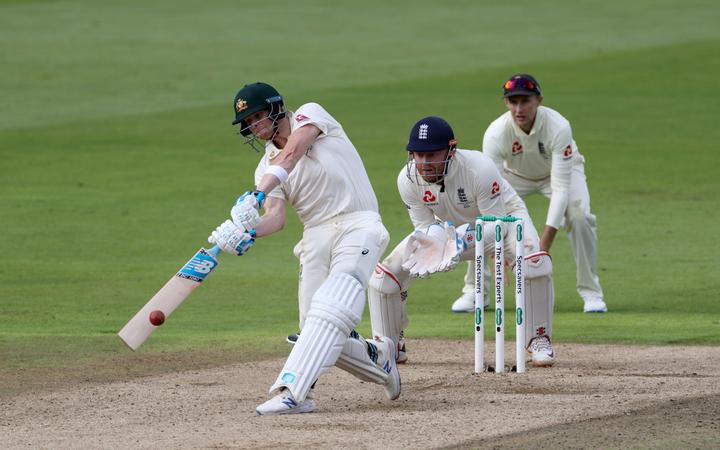 Smith, playing his first Test since suffering a delayed concussion that forced him to miss day five at Lord's then the entire third Test, finished 60 not out.

The former skipper, who was struck on his exposed neck by a Jofra Archer bouncer at the home of cricket, donned a clip-on neck guard for the first time in a match.

But otherwise there was no discernible change from Smith, who reclaimed top spot on the International Cricket Council's batting charts from Virat Kohli on match eve despite his stint on the sidelines.

Archer and Ben Stokes both tried to work the superstar over with bouncers but he handled it with aplomb, scoring freely alongside Marnus Labuschagne in a 116-run stand.

Recalled paceman Craig Overton snapped the partnership with a cracking delivery, which seamed off the deck and clipped the top of Labuschagne's off stump, to leave the game in the balance as both teams hunt a 2-1 series lead.

Smith passed 50 with an audacious boundary off Stokes, reaching so far for the delivery he almost dived to complete the off-balance cover drive.

Smith and Labuschagne (67) steadied after Stuart Broad removed both openers in a superb opening spell, while Manchester's fickle weather proved just as annoying for Joe Root.

The start of the post-lunch session was delayed by 140 minutes because of heavy rain. The showers returned when tea was taken, prompting umpires to abandon hope of any further play.

Labuschagne and Smith showed great composure while batting under overcast skies, absorbing gusts so strong that umpires briefly opted to play without bails because they kept falling off.

Tempers frayed as the bails and swirling chip packets caused multiple delays, with Broad and Overton both fuming at Labuschagne for pulling out during the bowler's run-up.

"I thought I heard the bails fall off, my bad," Labuschagne explained to England's irate fielders.

Travis Head, who will resume on 18, survived a couple of nervous moments.

Head fell flat on his face during the penultimate over of the second session, barely managing to keep out a Stokes yorker with his pad.

Root reviewed the on-field verdict but the delivery pitched outside leg stump.