Latest - New Zealand motorcycle star Bruce Anstey has made a stunning return to the sport in the Isle of Man after wining in the Lightweight Classic TT. 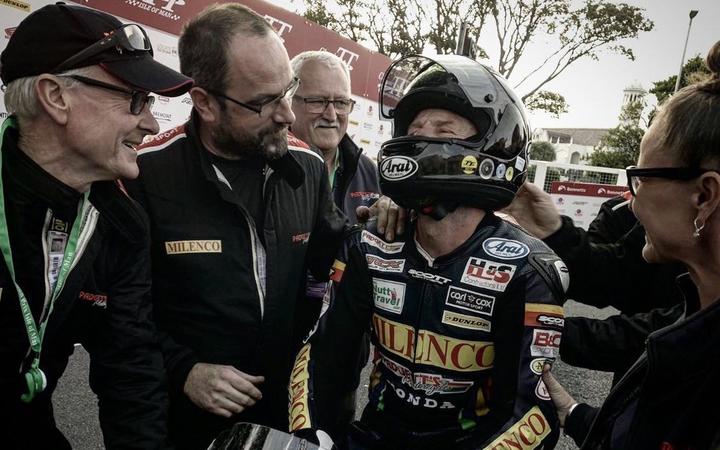 Clive Padgett (left) and other members of the Padgett Racing team congratulate Bruce Anstey after his win. Photo: Twitter - @PadgettsRacing1

The 50-year-old, who's one of the most successful racers in the long history of the TT races, had to quit last year to battle cancer.

This morning he rode to a superb win around the Mountain Course.

It was a one-two for the Milenco by Padgetts team as Davey Todd finished in second. Yamaha rider James Hind was third.

The hugely popular Anstey spoke to Manx Radio moments after his victory.

"Last lap you are always really nervous listening to the engine short shifting everywhere ...but not trying to go so fast, everybody's waving out. I just tried to keep my concentration and just get it to the end."

Liverpool laid down an emphatic early-season marker as they outplayed Arsenal this morning to win 3-1 and ensure they are the only team left in the Premier League with a 100 percent record.

On another eventful afternoon in England's top-flight, Manchester United suffered more woe from the penalty spot as they went down to a shock home defeat 2-1 to Crystal Palace and Frank Lampard celebrated his first win (3-2) as Chelsea manager at Norwich City.

Elsewhere, Leicester City repelled a fightback from Sheffield United in a 2-1 win at Bramall Lane.

Southampton won 2-0 on the road over Brighton & Hove Albion and Watford's painful start to the season continued with a 3-1 defeat at Vicarage Road to West Ham United.

Waikato side Melville United have earned their second appearance in a Chatham Cup final after beating Bay Olympic 2-0.

United will meet Napier City Rovers on September 8 after they overcame 2017 winners Onehunga Sports 2-1 in an extra time thriller.

Napier City will be gunning for their fifth Chatham Cup title.

Coastal Spirit have booked their berth in the women's Kate Sheppard Cup knockout final with a nail-biting extra time 1-0 win over Wellington United in the Capital.

Spirit, who last lifted the cup in 2013, will take on Eastern Suburbs after the Aucklanders also went to extra time in holding off a determined challenge from Hamilton Wanderers.

It will be Suburbs second finals appearance in three years.

An unbeaten Joe Root has stalled Australia's push for an Ashes-retaining victory in Leeds, where England reached 156-3 after being set a target of 359 as both teams talked up their chances.

Meanwhile, Joe Denly described his gutsy half century to give England hope of saving the third Ashes test at Headingley as among the hardest knocks of his career.

Denly, 33, had endured a lean series, failing to reach fifty in four innings and averaging 19.4 to come under pressure for his place in the side.

Denly came out to bat at 15-2 following the early dismissals of Rory Burns and Jason Roy.

He shared a third-wicket partnership of 126 with his captain Joe Root - the highest of the match - and England ended the day on 156-3.

The Tall Blacks pushed world number three France for the majority of the game, but a sloppy third quarter saw France pile on an 18-point lead after being behind by one at the half.

It proved the difference in a 95-81 defeat for the New Zealanders as both teams got their Four Nations tournament underway in China.

Assistant Coach Pero Cameron felt it was an opportunity they let slip away.

"We are disappointed with the result and the way we played, in particular we switched off in the third quarter and allowed them too many easy points and let the game slip away, especially late in the quarter with some silly turnovers and soft baskets.

"Credit to the French though, they are a world-class team and hurt us in those moments, but we have to be better and learn from this heading into the World Cup."

England have delivered a commanding performance to delight a sun-drenched Twickenham as they ran in eight tries in a record 57-15 rout of Ireland in their Rugby World Cup warm-up.

After an early wobble England took total control, delivering the sort of ambitious, high-speed all-court game that has been on show only in fits and starts over the last two years.

All coach Eddie Jones's selections came off, with Owen Farrell converting six of the tries and landing an early penalty from inside centre on Saturday.

It was England's highest score and biggest margin of victory over Ireland.

Elsewhere, Scotland bounced back strongly from last week's thrashing by France by winning the return fixture 17-14 at Murrayfield in what was a scrappy Rugby World Cup warm-up clash.

A brave fightback in the final 15 minutes brought the Counties Manukau Steelers back into the Mitre-10 Cup clash but they were edged 31-26 to neighbours Waikato in Pukekohe last night.

Waikato led 31-7 with 20 minutes remaining before the Steelers found their mojo with two late tries before time ran out as they mounted another attack.

The home side did manage two bonus points for their four tries and loss by less than seven points.

The Silver Ferns coach, who's departing the Lightning is on course for a third straight title.

The Lightning will host the New South Wales Swifts in next Saturday's grand final qualifier.

Benji Marshall has turned back the clock to keep the Wests Tigers' National Rugby League finals hopes alive and end the Newcastle Knight's horror week with a 46-4 flogging.

With their best opening-half performance in 13 years, the Tigers led 30-0 at the break and barely let up to claim their biggest win over Newcastle.

Marshall started at hooker and set up five tries for the equal-highest assist haul of his career, while Luke Brooks was sublime and winger David Nofoaluma scored a hat-trick.

The result leaves the Tigers in ninth place, and still a shot at the finals.

With the finals less than three weeks away, the Roosters extended their winning streak to six and reinforce their status as premiership favourites.