Australia closed in on a victory that will see them retain the Ashes after ending an incredible second day of the third test with a lead of 283 runs, having bowled out England for an embarrassing 67 in their first innings. 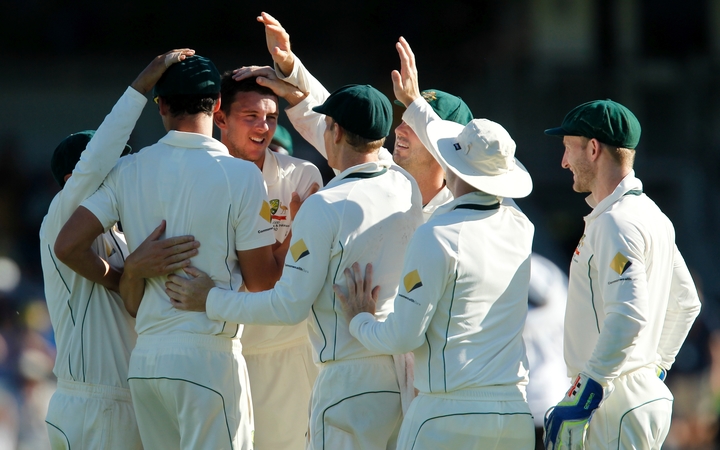 Australia were on 171-6 in their second innings at the close at Headingley, with a sizeable advantage after England suffered a humiliating day at the crease with Josh Hazlewood taking five wickets to help skittle out the hosts.

Starting the day chasing Australia's first-innings total of 179 and trailing 1-0 in the five-match series, England lost cheap wickets and were dismissed for their 12th lowest test innings total ever in glorious sunshine in Leeds.

Joe Denly top scored with a measly 12 runs -- the lowest ever highest score for an England batsman in a test innings -- with captain Joe Root, on his home ground, falling for his second duck in a row as the hosts' innings lasted less than 28 overs.

Australia, spearheaded by Steve Smith's replacement Marnus Labuschagne (53 not out), added to their lead in the evening session, before two late wickets gave England some hope of salvaging the test.

As holders, Australia would retain the Ashes with victory as England could only draw the series.

"We have missed an opportunity today," England batting coach Graham Thorpe said. "A couple of good balls got our top six, but there was also some poor shot selection.

"The game is not over from this position, though."

Out-of-form opener Jason Roy was first to go, flashing at a delivery outside his off stump and edging to the slips for nine -- the first of 16 wickets to fall on a remarkable day.

Things went from bad to worse for England as captain Root edged one to David Warner in the slips.

Rory Burns and England World Cup hero Ben Stokes both fell cheaply after playing at shots they did not need to, with Denly, who rode his luck during his innings, out for 12 as England went into the lunch break on 54-6.

There was no relenting from Australia. Chris Woakes was out first ball of the afternoon session as Australia made light work of the England tail, with Hazlewood finishing with figures of 5-30 to help ensure both sides' first innings lasted just 480 balls combined.

"In the sunshine you think a great batting day, but the first hour was fantastic," Hazlewood said.

"I cannot remember a day like this. I don't think many teams are winning if they get 60 or 70 runs."

Warner was out for a second-ball duck off the bowling of Stuart Broad at the start of the tourists' second innings.

It was Broad's 700th wicket across all formats making him only the second England bowler to reach the mark after James Anderson.

Jack Leach struck with this first ball to remove Marcus Harris for 19, before Usman Khawaja was caught by Roy for 23 following another poor shot.

Root dropped an easy catch to let Labuschagne off the hook, before Stokes came into the attack to dismiss Travis Head for 25 after tea.

Labuschagne remained patient and reached his third successive half century, before Broad removed Tim Paine for a duck to give England a glimmer of hope.