All Blacks coach Steve Hansen has heaped praise on captain Kieran Read after the team produced a crushing performance to retain the Bledisloe Cup. 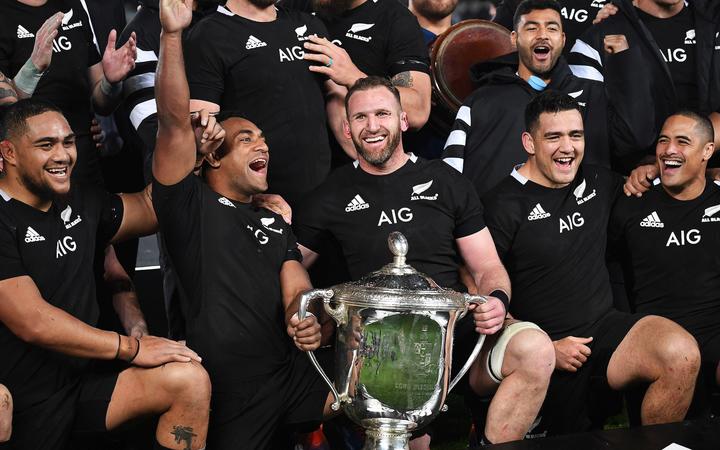 After a poor performance and record defeat to the Wallabies in Perth last weekend, the All Blacks responded to the pressure with a shutout 36-0 win at Eden Park last night.

The victory extends New Zealand's hold on the Bledisloe to 17 years, as well as their unbeaten streak at their Auckland fortress to 43 matches.

After the team celebrated with Prime Minister Jacinda Ardern, Hansen said his skipper Read deserved a lot of credit for his part in the bounce back display.

"The guy that leads from the front is one of the guys who copped a lot of the criticism, the fella on my left here (Read).

"[I'm] extremely proud of how he led the week and how he played tonight."

Read was one of many standout performers for the home side. Also among that group were wingers George Bridge and Sevu Reece, who both dotted down for a try.

Selectors raised eyebrows when the inexperienced duo, with just four Test caps between them, were promoted to start ahead of big name duo Ben Smith and Rieko Ioane. But Hansen said he wasn't shocked to see the Crusaders duo Bridge and Reece play well.

"You don't put people in your team if you don't expect them to be able to play at that level.

"Everybody saw what happened. They both played very well."

Another notable feature of the clinical performance was the improved effectiveness of Richie Mo'unga and Beauden Barrett in their dual playmaker combination.

The match was the third straight with Barrett back at fullback and Mo'unga driving the team from first five-eighth.

Assistant coach Ian Foster said, for a couple of reasons, he wasn't surprised to see the pair prove more assured at Eden Park.

"When you're starting some things off, it does take a little while for the instincts to kick in. We've seen that [with them] in the last couple of Tests.

"Tonight they were probably forced more into the two pivot role with the conditions and in some ways that made it a little bit easier.

"But it's also a result of two or three solid weeks of playing and training together. Things just started to look a little bit more intuitive."

The result not only ensured the Bledisloe Cup would again stay in New Zealand, it also meant Hansen will never have relinquished the prized trophy during his tenure as All Blacks head coach.

Hansen, who is stepping down after this year's World Cup, said that was a hugely satisfying fact.

"That's massive. As we've talked about for many years now, outside of the World Cup it's the most important trophy we have.

"We seem to have this thing in World Cup years where we come to that final [Bledisloe] game and we have to win it.

"It's just a nice feeling to be able to say, well, not on my watch."