It's all even after the second day of the second Ashes Test at Lord's with Australia 30 for one in reply to England's first innings of 258. 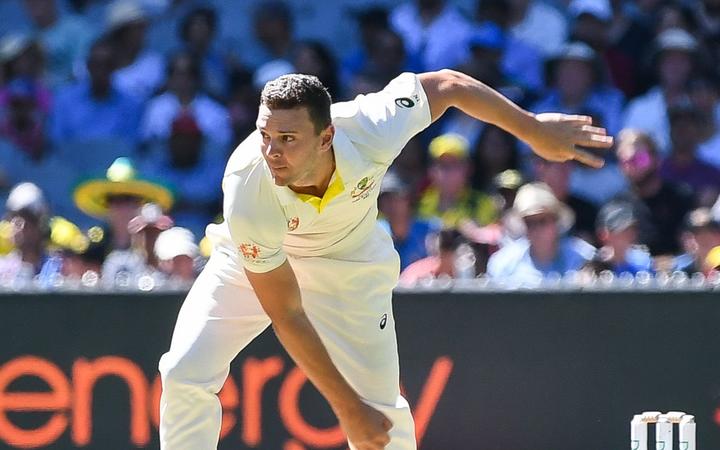 After the first day was washed out the Australian captain Tim Paine won the toss and decided to bowl first.

Rory Burns and Jonny Bairstow made half-centuries but it was a disappointing batting performance by England, and Australia will be confident of claiming a first-innings lead and pushing on for a win that would put them 2-0 up in the series.

"I don't think we have had our best day, we dropped a few catches but if we are batting at the end of the day we are pretty happy," Lyon said.

"We want to be a team that no matter what we do first we are competing and playing a positive brand of cricket."

Captain Joe Root twice drove Cummins sweetly to the extra cover boundary before, on 14, he was trapped lbw by Hazlewood with a delivery that jagged back and kept low.

Burns, who made a patient century in the first test at Edgbaston, dug in to play the anchor role again but he was given a life when he drove loosely at a wide ball from Peter Siddle and Usman Khawaja spilled a sharp catch at gully.

Hazlewood, recalled to the side, bowled two probing and accurate spells in the morning, conceding only 14 runs in 10 overs to lift Australia's quest to win the Ashes in England for the first time since 2001.

Burns slog-swept spinner Lyon for four to bring up England's fifty and the left-hander was 34 not out with Joe Denly unbeaten on 27 as the hosts reached 76 for two at lunch.

As has happened regularly in Denly's fledgling test career, however, he failed to capitalise on a solid start.

The right-hander added three runs before he nibbled at a full-length Hazlewood delivery and edged another routine catch to Paine.

Burns completed his third test fifty, off 119 balls, and he was the victim of a brilliant reaction catch by Cameron Bancroft at short leg as the batsman looked to turn a short delivery from Cummins off his hip.

Jos Buttler made 12 before he hung his bat limply at a wide delivery from Siddle to nick it to Paine and Ben Stokes missed a straight ball from Lyon to depart lbw for 13 with England reeling at 138 for six.

Bairstow and Chris Woakes steadied the ship with a seventh-wicket partnership of 72 in bright sunshine at the home of cricket before the latter gloved Cummins down the leg-side to Paine to fall for 32.

Jofra Archer made 12, Stuart Broad 11 and Bairstow was last man out, caught in the deep for 52 off Lyon who moved alongside great Australia fast bowler Dennis Lillee on 355 test wickets.

"It is pretty hard to see my name alongside the true legends of Australian cricket," Lyon said. "It's a special moment and hopefully a few more will come."

Australia had about 20 overs to bat on an extended day and they lost David Warner, who was bowled by a fine delivery from Broad for three.

Bancroft (five not out) and Khawaja (18 not out) survived a fiery spell by Archer on his debut, however, and with rain forecast to disrupt day three, England face an uphill task to level the series and boost their hopes of regaining the Ashes.

"There was some good bowling, a bit of nibble and we have seen in that period if you stick enough balls in the right areas it can be difficult," Burns said.