Bitter anti-referee sentiment lingers in Auckland, even after the Warriors clung on for the best win of their NRL campaign.

Halfback Blake Green and coach Stephen Kearney both proclaimed they'd rather be talking about the 24-16 upset of Manly at Mt Smart Stadium on Friday but couldn't help but unleash on the contentious late decision to send Adam Blair to the sin bin. 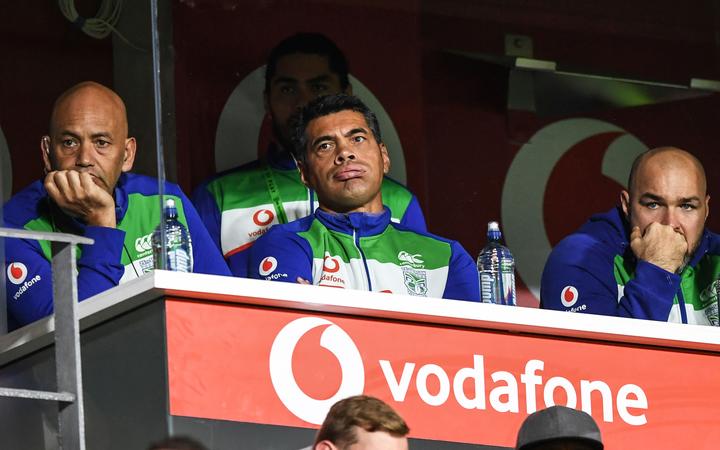 Green was the most outspoken, telling referee Ben Cummins to "just kick us out of the comp", following the 67th minute marching that nearly opened the door for a Sea Eagles win.

Down 18-0, the visitors scored three tries in eight minutes to trail by two before the Warriors clung on.

Teammates were fuming when Blair had to go for a seemingly accidental bump into Sea Eagles hooker Manase Fainu following a Manly kick through, which was deemed a potential tryscoring situation.

It came two weeks after the explosive loss to Parramatta, after which NRL bosses apologised for several mistakes.

The Warriors feel they've been on the receiving end all year and Green was picked up on ref microphones shouting: "All this bulls...... they throw at us. Just kick us out of the comp, man. Don't even worry about it. There's plenty of Australian teams."

The veteran playmaker regretted his outburst later in the sheds but remained bemused by the ruling.

"We've copped a few of them this year and I've been pretty quiet about it. But I just wanted to let him know my thoughts."

Kearney laughed when told Cummins was also heard telling the Warriors he didn't think a sin binning was warranted.

"The ref is out on the field, he's got the best feel for the game, not someone sitting in a box who's watching.

"It could have been really costly, I don't know where Adam is supposed to go. He turns around to chase the kick and someone runs into the back of him and falls over.

"They looked long and hard to find it (penalty) and they did."

Kearney said he had tired of talking about officiating and believed the mental fallout from the Eels match played a part in his team's tired 46-12 loss to Canberra last week.

Kearney said he was heartened by after being briefed on what he dubbed a "wonderful" meeting subsequently, between NRL head of football Graham Annesley and Warriors hierarchy in which the club aired some of its grievances.