Nicole Lloyd will never forget the day, three years ago, when a tall young Dutchman walked into the Christchurch school where she was teaching. 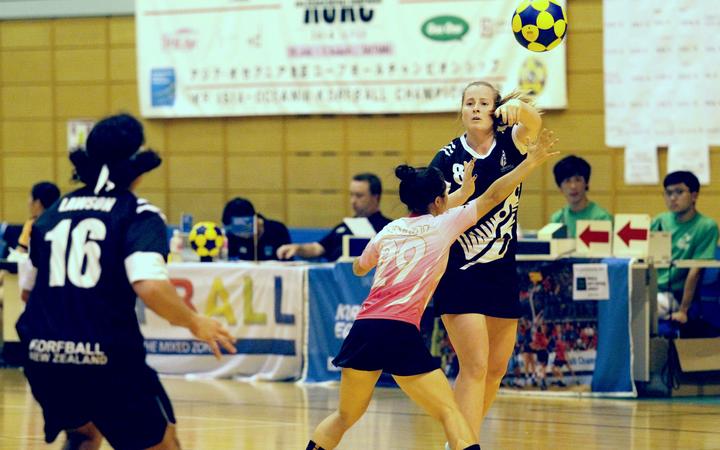 Youri Borrink had come to show Lloyd's intermediate-age students how to play korfball - a sport neither Lloyd nor the kids had ever heard of.

They weren't alone. Korfball isn't a name that naturally rolls off the Kiwi tongue. One devotee says it can be fairly described as "the best sport you've never heard of".

To describe it simply, korfball is a game with a hoop like netball, but inside the court, and played with the intensity of basketball - by a team with an equal number of males and females.

Lloyd was intrigued. She had been a promising netballer, playing premier grade in Canterbury, but had given up her dream of becoming a Silver Fern when she snapped her Achilles tendon.

After three weeks under Borrink's guidance, Lloyd was coaching a kid's korfball team; the Christchurch South Intermediate side then won a local schools tournament. And then Lloyd found herself playing korfball herself, in a Sunday night winter league.

"It was completely different to netball and basketball. And, with the guys involved, it made it quite challenging," she says.

Lloyd quickly fell in love - with both the game, and with Borrink.

Now they live together, and play korfball alongside each other in the national team. And they're about to make history when New Zealand plays at the korfball world championships next week for the very first time.

"I believe in taking every opportunity," Lloyd, 26, says. "One minute I'm coaching the kids, the next I'm playing for my country."

It was a Dutch school teacher, Nico Broekhuysen, who invented korfball back in 1901, after seeing a similar game being played in Sweden. He wanted korfball to involve both men and women, so made up teams with four from each gender - which back then, as you can imagine, courted a fair bit of controversy.

Broekhuysen's game also has elements of netball and basketball. The hoop (or korf, Dutch for basket) sits on top of a 3.5m pole - where netball hoops are 3.05m above the ground. The hoop stands well in from the end of the court, so players can shoot from 360 degrees.

Anyone on the team can score a point, by shooting the ball through the korf. But you can only shoot if you're not being defended - which is when your opposition is within arm's length and trying to block you. Women can only defend women; men can only block men.

Players can't dribble, kick, run or walk with the ball. And there's no contact allowed either.

Like basketball, there's a 25 second shot clock to sink a shot, or hit the korf rim.

Korfball has already gone one better than netball - it was played at the Olympic Games in 1920 and 1928 as a demonstration sport. And, like netball, it continues to push for Olympic inclusion. 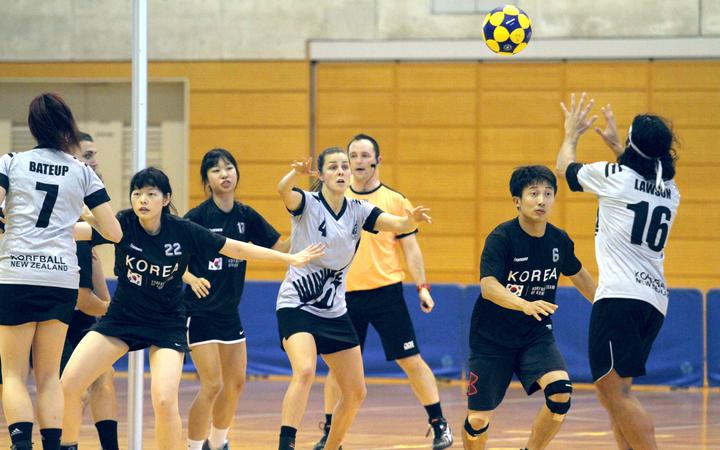 Koru captain Bevan Lawson takes a shot before his Korean opponent "defends" him during the Asia Oceania champs, where NZ qualified for the worlds for the first time. Photo: Osamu Kimura

Lloyd never imagined playing anything but netball: "Growing up, it was all I knew".

While at university, she chaired the Netball NZ Youth Advisory Group, representing the voices of young netballers around the country. She still coaches netball teams at St Margaret's College, where she went to school and is now a teacher.

But she's surprised how korfball "opens your eyes to how restrictive netball can be", she says.

"There's so much freedom and it's played at a faster pace. Everyone has to be able to shoot the ball and defend the ball really well; be a jack of all trades. You have to be constantly passing and moving, and coming up with creative strategies to get free and shoot."

A goal attack in netball, Lloyd gets her greatest satisfaction from scoring in korfball, because it's more difficult.

"It's a different shooting technique, more like basketball. The hoop is taller so you need more power, and you're shooting from further away," she says.

"And the game is kinder on your body than netball is; they're a bit more lenient with the stepping rule."

This is the first year Lloyd hasn't played social netball as well, choosing to focus on the world championships. These latest school holidays have meant she's been able to train every day.

It's not unusual to see Lloyd and Borrink out in the street in the southern Christchurch suburb of Cracroft, honing their korfball skills. Borrink, as the schools development officer for the sport, lugs around four portable korfs in the back of his car.

"We live at the end of a quiet street, so we can pull out a korf and practise our shots," Lloyd says.

The beauty of korfball is that it can be played on grass or sand, as long as there's a couple of hoops.

Borrink, who's been involved in korfball most of his life, played for one of the top Dutch clubs, DOS'46, before coming to New Zealand.

Last year, when New Zealand qualified for the world championships at the Asia Oceania championships in Japan, Borrink was the team manager. Now that he has New Zealand residency, he can play for his new country.

It's a big deal that New Zealand's team, who call themselves the Korus (as in the silver fern frond), have made it to next month's world championships in Durban, South Africa.

The world's top 20 teams play every four years. New Zealand face a baptism of fire - playing the undisputed world No. 1, the Netherlands, in their opening game.

New Zealand's coach, Manon Wiegerink, knows only too well what her team will be up against. 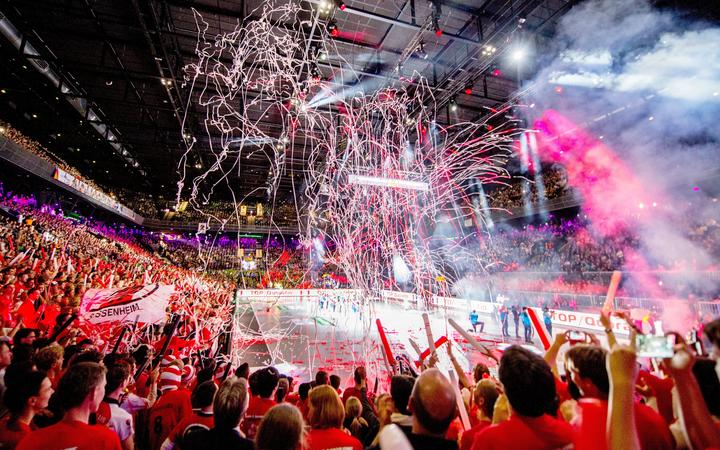 Finals of the Dutch Korfball League draw in around 15,000 fans in Amsterdam. Photo: AFP

Until this year, Wiegerink played at the top level of the sport, in the Netherlands' Korfball League - most recently with the Blauw-wit club in Amsterdam. The sport is big in Holland, where families play, and the league finals draw crowds of 15,000.

She came to New Zealand two years ago to travel and hold korfball clinics in schools, and now, on her third trip back, has found herself coaching the Korus.

"The Netherlands are the best in the world, and they are paid to play the sport," Wiegerink says. (The Korus have to pay their own way to Durban). "But it's such an honour to play them, because we have such a Dutch influence in the team. It's a special game, and we need to make the most of it, and learn as much as we can."

And the New Zealanders are developing their own distinct style of play, which may catch their European opponents unawares.

"We use our knowledge from netball and basketball, because why change our game if we have players with strong backgrounds in those sports?" Wiegerink says. "We have battles close to the korf, like in netball and basketball; a lot of inside play. That's new to korfball, where everyone has been passing to each other to get open and shoot. We're using each other's position a lot more.

"It's one big chaos sometimes, but it's fun and it makes us unique."

Wiegerink has seen the game grow, especially in Christchurch, where there's a weekly high school competition, and Year 7-8 tournaments which attract a large number of teams.

"By playing at the world championships, we will be able to show more of the world what we are doing over here," she says.

"We are the underdogs, and no one knows us and they don't know how we play, they've never seen us before so we can use that a little, and be surprising. We don't have anything to lose."