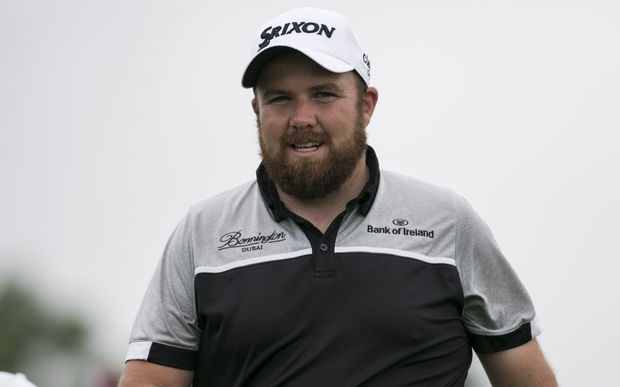 If there were any nerves concealed behind Shane Lowry's thick beard they had no impact on his golf as the Irishman took the British Open by the scruff of the neck with a sensational course record in the third round.

On a day ripe for scoring on a becalmed Dunluce links, joint overnight leader Lowry provoked a chorus of roars from the galleries that had flocked to the Antrim coast as he moved four shots clear of Tommy Fleetwood with an eight-under 63.

Lowry, who comes from across the border in County Offaly, has become the darling of the fans who have flocked to the Northern Ireland coast and was imperious as he put together a stunning course-record 63 at Royal Portrush.

Several other players, notably Englishman Fleetwood, tucked into the third-day birdie-feast but they could not keep pace with the 32-year-old from across the border.

Rory McIlroy may have disappointed the huge sell-out crowds by missing the cut for the weekend, but in his place Lowry has become the focus of adoration from the supporters.

Thibaut Pinot led a French one-two ahead of overall leader Julian Alaphilippe to win the 14th stage of the Tour de France.

The Groupama-FDJ rider jumped away from a small group 200 metres from the line to beat yellow jersey holder Alaphilippe and third-placed Steven Kruijswijk of the Netherlands by six seconds.

Defending champion Geraint Thomas lost contact one kilometre from the finish and crossed the line in eighth place, 36 seconds off the pace.

Pinot is now sixth overall, 3:12 behind Alaphilippe, who extended his lead over second-placed Thomas to 2:02.

Kruijswijk is third, 2:14 off the pace, with Bernal 3:00 behind Alaphilippe, who was facing a huge test in the first high mountain stage of the race.

Sunday's 15th stage is a 185km punishing ride from Limoux, ending with a gruelling ascent up to Prat d'Albis.

Three tries in the last ten minutes has helped to deliver South Sydney a 30-18 NRL win over North Queensland in Townsville.

The visitors were behind for most of the second half but an inspired finale by representative forward Cam Murray sealed the result for the Rabbitohs.

Dane Gagai scored from a kick in the 71st minute and when Adam Reynolds converted the scores were level - but from there it was the Murray show.

He threw the last pass for prop Tevita Tatola - who caught the offload brilliantly on his knees - before Murray iced the win with a runaway effort.

Cowboys coach Paul Green lamented his side's inability to shut down the match when up 18-12.

The Cowboys will travel to play Cronulla on Thursday while the Rabbitohs will host the Dragons on Friday.

New Zealand golfer Lydia Ko and her South Korean partner In Gee Chun have finished in a tie for sixth at the LPGA tour's only two-player event in Michigan.

The pair carded a final round eight under par 62 to end on 18 under for the tournament, 9 shots behind the winners American Cydney Clanton and Thailand's Jasmine Suwannapura.

South African Akani Simbine pulled off something of a surprise in the London Diamond League 100 metres, holding off local hope Zharnel Hughes and former world champion Yohan Blake to come home in 9.93 seconds.

Hughes had clocked an impressive 9.96 in the heats, despite easing up and running into a slight headwind but he was always trailing in the final, posting 9.95.

Blake, the joint-second fastest man of all time with his 9.69 set in 2012, is getting back towards his best and continued his good season with third in 9.97 as the top five all broke 10 seconds.

Olympic champion Elaine Thompson was a convincing winner of the women's 200m in 22.13, holding off fast-finishing Marie-Josee Ta Lou (22.36) and Britain's Beth Dobbin, who was delighted with a personal best of 22.50.