The Silver Ferns have shocked Commonwealth Games champions England at the Netball World Cup, beating them 47-45 and ensuring an incredible sixth straight final with arch-rivals Australia. 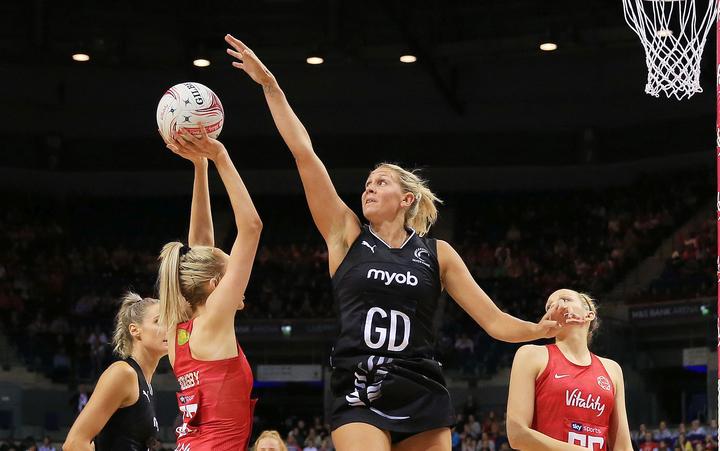 The Silver Ferns made a dream start in Liverpool, and England found themselves down 5-nil.

Jane Watson and Casey Kopua poured on the pressure, both coming up with flashy intercepts.

The retiring Kopua, determined to make another World Cup final, pulled off classic blocks and picked off balls outside the circle.

Helen Housby helped get England back into the game, going to post, while GS Jo Harten tried to recover from early nerves. Housby also picked up a couple of key intercepts.

The Silver Ferns led 12-9 after the first quarter.

England made a far better start to the second quarter, evening things up 13-all.

But the Silver Ferns asserted themselves again.

Watson got another flying intercept outside of the circle.

The scoreboard pressure was piling on the home town favourites, with New Zealand up by 6 goals at one point.

The changes worked well, and England rapidly closed in on the lead as the home crowd lifted.

At times Maria Folau and Ameliaranne Ekenasio played on top of each other but they continued to shoot well, finishing the game with 90 percent accuracy.

The Roses finished the second quarter ahead 24-21, taking the quarter by 6 goals.

New Zealand came out of the blocks strong in the third quarter and were soon up 4-1 in the period.

Shannon Saunders came on at WA for Gina Crampton midway through the third quarter.

The Silver Ferns gained the ascendency again, while Watson inspired with another block-like intercept.

At one point the visitors scored 5 goals in a row.

The Ferns finished the third quarter with a 36-33 lead, taking the quarter 15-9.

Katrina Rore who did a good job again at WD got an early intercept in the fourth quarter and it was a goal for goal affair for a while.

There were some held balls on both sides.

Ekenasio had her first miss with 8 minutes left in the game.

Saunders pulled off an inspiring intercept and chase which was rewarded by the shooters.

The margin fluctuated between four and two goals, with the Silver Ferns still holding on.

With one minute left on the clock New Zealand played down the time to perfection, to the joy of the small contingent of New Zealand fans, while breaking the dreams of the Roses.

Ekenasio's shooting was phenomenal shot - finishing with 25 from 26, while Folau was also in the zone, scoring from all over the circle, with 22 from 26.

The intercept count was well in New Zealand's favour - 10 to England's five.

The Silver Ferns will meet Australia on Monday morning, one win away from an incredible comeback story.