France's Julian Alaphilippe continued to amaze as he claimed an impressive victory in the 13th stage of the Tour de France, a 27.2-km individual time trial, to extend his overall lead. 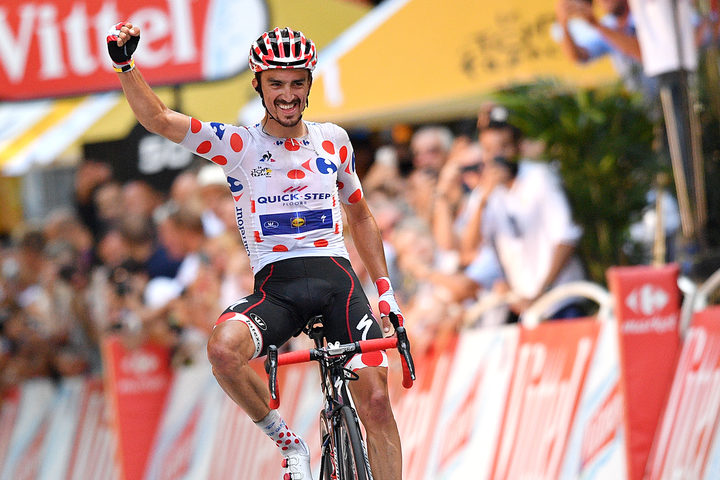 Following his second stage win this year, Alaphilippe leads Thomas, who is emerging as Team Ineos' sole leader, by 1:26 and Dutchman Steven Kruijswijk by 2:12.

Saturday's 14th stage is a 117.5-km mountain trek from Tarbes ending at top of the Col du Tourmalet, where the pre-race favourites will show their hands.

"I knew on that kind of course I could perform but I didn't think I could win. The route suited me so I told myself 'give everything, you have nothing to lose'," said world number one Alaphilippe, winner of the Milan San Remo classic this season.

"I pushed my limits, it was crazy with the crowds, I don't realise yet."

Alaphilippe is the first Frenchman to win an individual time trial - prologues, which are shorter, excluded - since Jean-Francois Bernard in 1987.

Thomas's team mate Egan Bernal lost ground as the Colombian finished 22nd, 1:36 off the pace and slipped from third to fifth in the general classification.

Frenchman Thibaut Pinot, who lost considerable ground when caught at the wrong end of a bunch split last Monday, moved up to seventh thanks to a solid performance that kept him within two minutes of Thomas and took him to 30 seconds behind Bernal.

Alaphilippe's team mate Enric Mac also had good day as the Spaniard moved up to fourth overall and snatched the white jersey for the best Under-25 rider from Bernal.

Saturday's Pyrenean stage is expected to be a major test for the GC riders, and all eyes will be on Thomas, who will be expected to start gaining time on Alaphilippe.

"It's not going to be like anything we've seen so far during this Tour," the Frenchman said.

"I will give my best and I hope I won't crack. I will certainly not give up."

"There's a long way to go and a lot of hard stages to come now," the Briton said..

"I didn't really expect that, He's obviously going incredibly well, so he's certainly the favourite and the one to watch at the minute."

The time trial was a sobering moment for Briton Adam Yates, who slid down to 10th in the GC after losing 2:08 on Alaphilippe.

No Frenchman has won the Tour since Bernard Hinault in 1985.