The Black Ferns have shown their resilience to win the women's rugby super series and retain the world number one ranking. 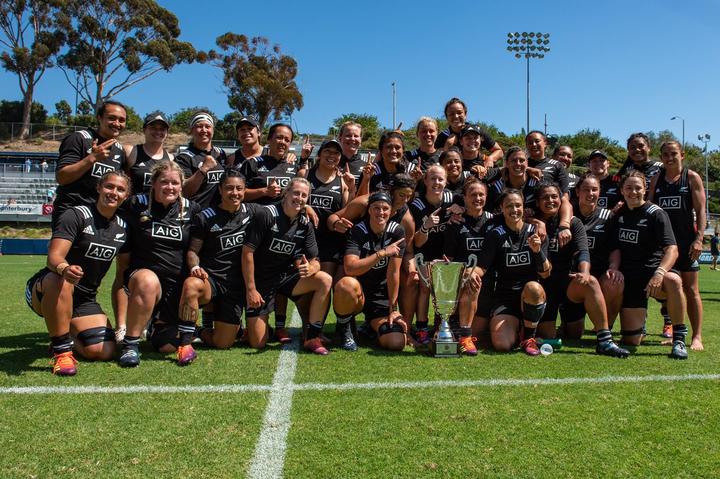 The world champions have come from 10-3 down and overcome the loss of two players to the sin bin to beat England 28-13 in the deciding game in San Diego.

"We do like to make it hard on ourselves sometimes," Black Ferns second-five Chelsea Alley said.

"I actually became a number six for a while there. I had to jump on the side of a few scrums because of those yellow cards, but that's when we really dug deep as a team, stuck together, stuck to our systems and worked really hard.

"We're just happy that we finally put together a really good performance for our friends and family and all of our supporters."

"She (Wickliffe) is all class," Alley said.

"She's awesome to have out on the field. She talks a lot, her defense is great and obviously with her hat-trick today she's someone who does the damage on attack.

"I definitely prefer having Renee on my team than on the opposition."

The result means the Black Ferns finish with 14 points from four matches, one clear of England.

The English won their previous three matches at the tournament featuring the world's top five ranked nations, while New Zealand was beaten 25-16 by France last week.

It was the Black Ferns' third match in eight days and provisionally dropped them to second in the world rankings.

But they appeared to benefit from having a week to prepare to play England and secured top spot.

"This eight day turnaround was huge for us," Alley said.

"We were rested, we were recovered, we got some really good training sessions in and...we came in today really humming."

FT | And that's the game!! The Black Ferns win the #SuperSeries2019 and in doing so retain their World number one ranking!!

The two sides traded penalties to start the match before England centre Emily Scarratt scored in the 11th minute, when Black Ferns hooker Toka Natua was in the sin-bin.

Once New Zealand was back to 15 players they started to gain the upper hand and were rewarded in the 26th minute when Wickliffe crossed for her first try.

She was the recipient of a line-bursting run from Cocksedge, who brushed off close to half a dozen tacklers before finding the right winger.

Wickliffe dotted down again moments later, from an intercept, and New Zealand's seven point deficit was turned into a 15-10 halftime lead.

England kicked a penalty in the 46th minute to cut the margin to two points before the Black Ferns again found themselves down to 14 players.

Prop Te Kura Ngata-Aerengemate was yellow carded for being offside, but England was unable to take advantage of their numerical superiority.

There were no additions to the score for the next 12 minutes before Cocksedge kicked her third penalty to stretch New Zealand's lead to five points.

Wickliffe then scored her third in the 65th minute following a break from replacement midfield back Theresa Fitzpatrick.

Cocksedge added the extras and then kicked her third penalty seven minutes late to seal the result.

The Black Ferns will now return home to prepare to play seventh ranked Australia in the Laurie O'Reilly Memorial Trophy next month.

The first test is in Perth on August 10, with the second and final match at Eden Park the following Saturday.