The Crusaders have staved off a mighty Hurricanes challenge to win their Super Rugby semi-final 30-26 in Christchurch and set up a home decider against the Argentinian side the Jaguares.

Out-scored four tries to three, the Crusaders found a way to remain on track for a third straight title, with first five-eighth Richie Mo'unga once again a key figure.

Mo'unga scored 20 points, while winger Sevu Reece scored a double to push him clear as the competition's leading try-scorer with 15.

It was enough to win a New Zealand derby thriller, quelling a Hurricanes side who were led by Ngani Laumape's double and an inspiring display from halfback TJ Perenara, whose 127th game was a Hurricanes record. 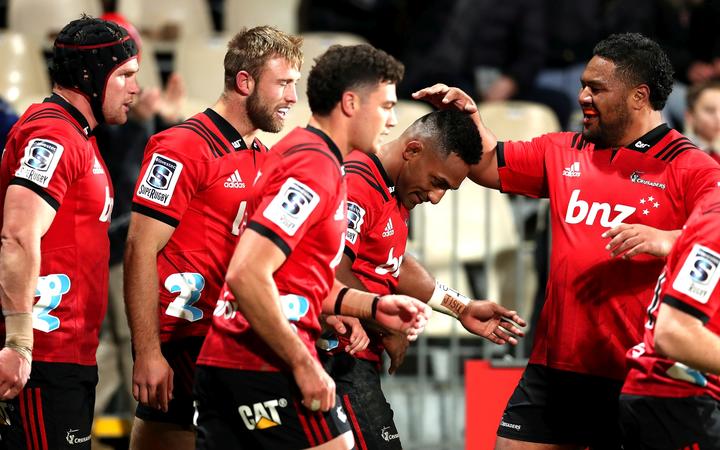 The Crusaders celebrate one of Sevu Reece's two tries in the win over the Hurricanes. Photo: Photosport

Standing in the way of a 10th Crusaders title are the Jaguares who side booked their maiden grand final appearance with a 39-7 demolition of the ACT Brumbies in Buenos Aires.

The Crusaders have won 30 successive home matches and have never lost a home finals match.

They are 23-from-23, with six of those wins coming over the Hurricanes.

The game came alive in the second spell after the Crusaders dominated the opening half but only led 13-7.

Reece's opening try from a Ryan Crotty cross-kick and Richie Mo'unga's boot pushed them clear but momentum swung with Hurricanes tries either side of the break, to Laumape and winger Ben Lam.

The teams alternated try for try over a compelling second 40 minutes, with tries to Mo'unga and Reece cancelled out by Laumape and Perenara, whose outrageous dummy from close range was bought, lifting his team to within a point with 19 minutes remaining.

Mo'unga's third penalty gave the Crusaders a buffer but they needed all their defensive resilience over the closing minutes to keep the desperate Hurricanes out.

"We did a great job up until 39 minutes in and it just shows the belief these [Hurricanes] boys have in their team," he said.

"Once they score one, all of a sudden the floodgates open. We're happy our boys stuck together and we get to go again."

Hurricanes counterpart Dane Coles said his team's theme in the build-up was simply to never give up.

"We absorbed a lot of their pressure and we were pretty happy to go 13-7 [into halftime]," he said.

"I'm proud of the bloody effort because everyone was writing us off.

"We worked hard just to come up short. So I'm proud of the ticker but gutted that we lost."