Stephen Kearney says Matt Lodge's bulk and quality would be warmly welcomed by the Warriors after conceding they've made a play for the Brisbane prop. 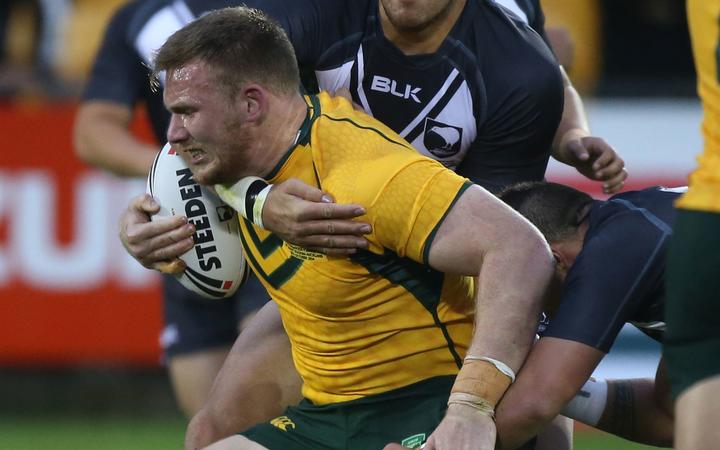 Matt Lodge carries the ball for the Junior Kangaroos against the Junior Kiwis in 2014. Photo: Photosport

Kearney wanted to side-step the nature of the Kiwi NRL club's approach, which is reportedly at an eye-watering level to cross the Tasman next season.

Lodge is considering multiple offers, including staying in Brisbane, although Auckland may have some appeal as his partner's father is Warriors recruitment boss Peter O'Sullivan.

Kearney conceded 24-year-old Lodge's signature would be a coup given his bullocking form over the last season and a half at Brisbane.

"We are always looking to try and improve our list and someone of Matt's quality would be an asset for the footy club," Kearney told reporters.

"Nothing has been formalised or anything like that. It's pure speculation at this stage, but we'll see what happens.

"He's a big body; I think he has done really well since he's been at the Broncos. He had a really good season last year.

"He's an old school front-rower, there's a lot to like about his game."

In confirmed Warriors recruitment news, hooker Karl Lawton added two years to his Warriors deal on Wednesday, a day after the rising Sydney Roosters second- rower Josh Curran was contracted for the same period, until the end of 2021.

Lawton's extension probably marks the death knell for Kiwis veteran hooker Isaac Luke, who has been dropped for Sunday's home game against Penrith.

Luke had the conditions of his one-season deal improved earlier this season but has struggled to find his best form and is now unlikely to be retained next year.

The Warriors pack will be down on experience, with second-rower Tohu Harris also missing, after undergoing surgery to heal a foot fracture suffered in the 24-20 win away to Gold Coast.

Harris will be out for up to six weeks, leaving Kearney hoping middle forward specialist Adam Blair can make a better fist of a wide role than earlier in the season.

Kearney said he liked the signing of 20-year-old Curran, who made his NRL debut off the bench when the Roosters played the Storm in round six and is rated one of the best junior forwards in NSW.