Winger Shaun Stevenson scored a hat-trick of tries as the Chiefs doled out a record 59-8 demolition of the Melbourne Rebels to storm into the Super Rugby playoffs while ending the shell-shocked Australians' season. 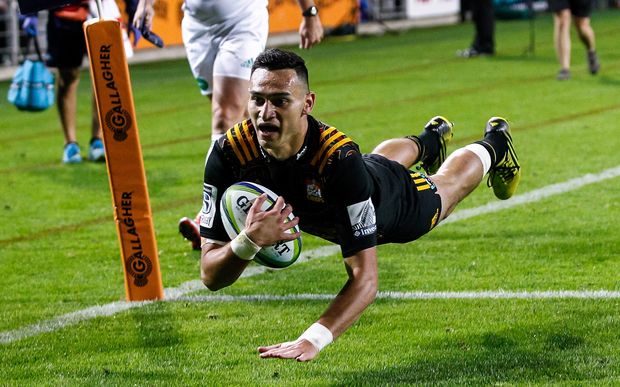 A week after the champion Crusaders humiliated the Rebels 66-0 in Christchurch, the Chiefs piled on more misery with a nine-try victory, racking up their biggest winning margin against the Rebels.

Written off after starting the season with four straight defeats, the Chiefs booked their eighth playoffs in succession with the bonus point win and now await other results this weekend to determine their quarter-final opponents.

"There was always a lot of belief and a lot of effort," said Chiefs co-captain Sam Cane of their late season rally.

"We're lucky enough to sneak into the playoffs which we're pretty excited about."

Stevenson grabbed an intercept try in the first half and crossed twice in the second, with Cane, Sean Wainui, Anton Lienert-Brown, Jack Debreczeni, Martin McKenzie and Lachlan Boshier grabbing the other tries.

The Rebels had their sole try in the 67th minute through lock Matt Philip, as their playoffs hopes dissolved with three successive defeats.

For a second consecutive year, the Dave Wessels-coached Rebels have fallen at the final hurdle and plenty of questions will be asked how a Wallabies-laden team so rich in talent could prove so brittle under pressure.

Since joining Super Rugby in 2011, the Rebels have yet to reach the playoffs and on Friday became the third Australian team to finish their campaign early.

With the Queensland Reds already eliminated, the New South Wales Waratahs were dumped out with a 49-12 thrashing away to the Highlanders earlier on Friday.

With the Crusaders and Hurricanes already qualified, New Zealand could have four teams in the playoffs if results go the way of the Highlanders.

The Chiefs needed to win by three tries or more to get the required bonus point, but the Rebels appeared eager to send them on their way as they committed a string of terrible errors in the first half.

First-five Quade Cooper, the Rebels' big-money signing, was culpable for the Chiefs' first two tries and did little for his hopes of joining Michael Cheika's Wallabies squad for a third World Cup appearance in Japan.

In the 13th minute, he kicked possession away with an ill-directed grubber then missed a tackle on Brad Weber as the pacy halfback burst forward to help set up Cane's opening try under the posts.

Less than 10 minutes later, Cooper kicked straight into Stevenson's shins at midfield on the left wing and the winger gleefully swooped on the ball before dashing away for an intercept try.

Down 14-3 after the half-time siren, the Rebels tried to run the ball out of their half but a horrible pass by Hodge at midfield fell short of his target and was again scooped up by the enterprising Stevenson.

The winger was pulled up by Cooper just short of the line but flanker Lachlan Boshier was there in support and barged over near the right post as the Chiefs went to the break with a 21-3 lead.

Tries by Lienert-Brown and Wainui in a five-minute burst soon after the restart killed off the contest, but the Chiefs would add another four, with first-five Debreczeni grabbing one at the 57th minute to compound his former team's misery.

All Blacks lock Brodie Retallick made a successful return from a serious wrist injury, emerging with a deep cut on his forehead but otherwise unscathed from his 59 minutes on field.