Tonga have wheeled out another formidable forward pack for their one-off Test against New Zealand but the same world class options aren't as obvious in the halves.

Coach Kristian Woolf has been forced to fly Leeds utility halv out for the June 22 Test in Auckland, where he looks set to partner another allrounder - North Queensland's John Asiata. 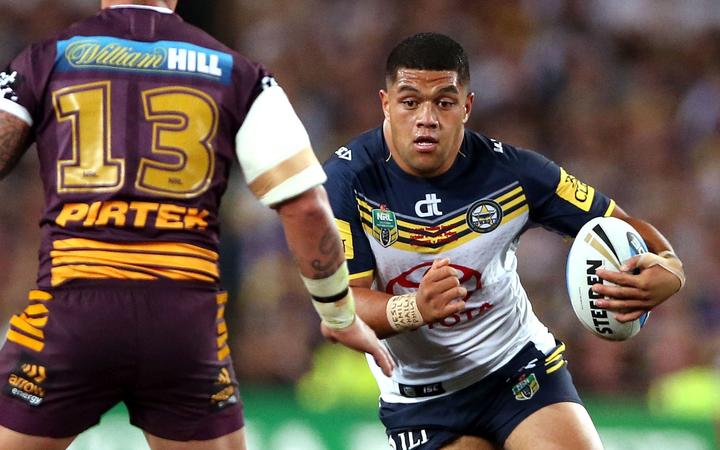 John Asiata will be part of a make shift halves combination for Tonga against the Kiwis. Photo: Photosport

Lolohea will need to readjust quickly after playing his most recent matches at wing or fullback in the English Super League.

There is greater pressure on him after a thumb injury ruled out Ata Hingano, the starting halfback in last year's 34-16 loss to Australia in Auckland.

Lolohea is the only member of Woolf's 22-man squad not playing NRL first grade, although five of them are uncapped, including Asiata.

The others are Broncos centre Kotoni Staggs, Roosters forward Sitili Tupouniua, Titans prop Moeaki Fotuaika and Manly hooker Manase Fainu, who could be a consideration for the halves.

There is no shortage of firepower up front, where Jason Taumalolo, Tevita Pangai jnr, Andrew Fifita and Addin Fonua-Blake will provide little respite for the Kiwis.

The only other notable absentee from last October's loss to the Kangaroos is captain Sika Manu, who has retired.

"We have had a good core of players for the Mate Ma'a Tonga team since the 2017 World Cup and we have been able to add some more depth this year,"

"I know these players and the wonderful Tongan fans are already excited for the event and this squad will give us every opportunity to perform well."

Woolf will trim his squad after this weekend's round of NRL matches.

The Kiwis team will be unveiled on Sunday.