It was as if the Golden State Warriors decided enough was enough. 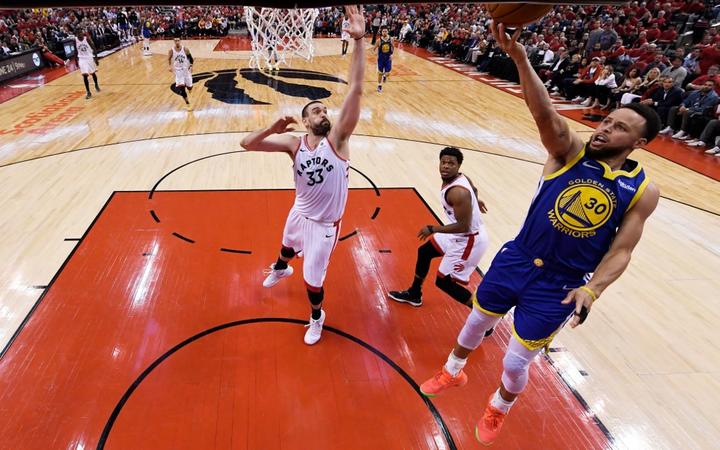 Stephen Curry #30 of the Golden State Warriors attempts a shot against Marc Gasol #33 of the Toronto Raptors during Game Two of the 2019 NBA Finals. Photo: AFP

After losing game one of the NBA Finals to the Toronto Raptors, they lost the first half of game two Sunday by five points.

Then, the two-time defending NBA champions reeled off the first 18 points of the second half and held on to defeat the Raptors 109-104 to even the series at one game each.

The next two games are in Oakland, California.

"It felt like we should have been down by a lot more than five," he said.

"For the first quarter and a half, we really had a tough time scoring. So the last whatever it was, four, five, six minutes, the game loosened up and we finally broke free and started getting some buckets.

"We started to look like ourselves and so at that point, it just felt better and then the second half we got it rolling and we ended up with 34 assists, which is more like our team."

It was not without suspense. The Warriors, who led by as many as 12 during the fourth quarter, had their lead cut to two points on Danny Green's three-pointer with 26 seconds remaining. But Andre Iguodala nailed a three-pointer with seven seconds left to complete the scoring.

The Warriors also emerged from the game with two injuries. Klay Thompson, who led them in scoring with 25 points, was limited to four minutes in the fourth quarter with a tight left hamstring. Kevon Looney was limited to 10 minutes for the game with a left chest contusion.

"Klay said he'll be fine, but Klay could be half dead and he would say he would be fine," Kerr said.

Kerr had no update on Looney.

"Well, they were obviously a little more aggressive [than in game one] and up in us a little bit," Raptors coach Nick Nurse said.

"I thought we were just a little bit impatient and didn't hold enough composure just to either, A, get to a strong shot or B, move it to the next one."

After leading by as many as 12 points during the first half, the Raptors led by five at halftime. The Warriors surged to a 34-21 third-quarter advantage to lead by eight points entering the fourth quarter.

"Just started too slow," VanVleet added. "You can't do that against this team. Missing every shot doesn't help, whatever, 10 possessions in a row we didn't score."

Danny Green's three-pointer cut Golden State's lead to four points with nine minutes left in the game, but the Warriors went up by 10 when Quinn Cook hit a pair of 3-pointers.

The Raptors cut the lead to eight when Lowry made one of two free throws with 4.26 to play. Lowry fouled out with 3.52 remaining.

Curry was hit with a technical foul for flipping the ball in the air with 1.08 to play after Cousins was charged with a foul. Leonard made the technical foul shot, then cut the lead to five when he converted both free throws on the foul charged to Cousins.