Steyn has spent more than a month on the sidelines though South Africa hope he will be fit to play India in their second match on Wednesday.

"He is a big loss to our team," said du Plessis. 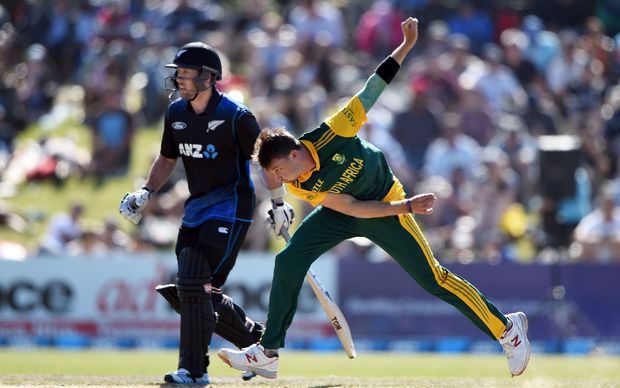 Dale Steyn in action at the 2015 World Cup against the Black Caps. Photo: PHOTOSPORT

"He was probably about 60 per cent when the squad was picked so we anticipated for this to happen, but a fit Dale Steyn makes our bowling attack a very, very strong one.

Du Plessis said the trio of Steyn, right-arm paceman Kagiso Rabada and fast bowler Lungi Ngidi represented a real strike force as Plan A if all were fit.

It was now a question of resorting to Plan B or C.

All-rounders Chris Morris and Dwaine Pretorius are in the frame to replace Steyn, with du Plessis saying the emphasis had to be on getting wickets.

"There's no point in trying to play a defensive style of cricket against England," he added.

"We'll pick our team to try and be as positive as we can be."

South Africa have yet to win the 50 overs title and du Plessis, captaining a World Cup side for the first time, said the emphasis would be on enjoying the cricket and the experience.

England, he said, were deservedly the favourites but South Africa would not make the mistake of getting too focused on the opposition.

"We are going in as underdogs," he said.

"There's not a lot of people talking about South Africa winning the World Cup. If that releases some players in the team, then that's great."