The Blues have hauled themselves off the bottom of the Super Rugby's New Zealand conference with a 23-8 win over the Chiefs at Eden Park in Auckland. 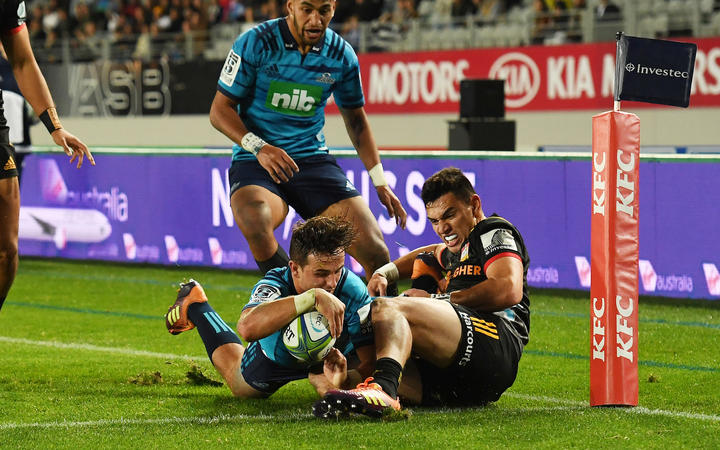 Harry Plummer scores a try for the Blues. in a Super Rugby game at Eden Park. Photo: Photosport

The win broke a four-match losing streak for the Blues, and was just their fourth win from 36 matches in New Zealand. It was also the first time they'd beaten the Chiefs in eight years.

Mitch Karpik opened the scoring after 17 minutes when he scored the Chiefs' only try after Blues winger Reiko Ioane tried to pop the ball back to a teammate while on his tryline, and Karpik was able to snatch it and flop over.

All Blacks flanker Sam Cane made an earlier than expected return after 24 minutes, called into action when Karpik was sidelined to the blood bin following a head clash.

It was Cane's first match since fracturing a vertebrae on the right side of his neck in a test against South Africa seven months ago.

Harry Plummer equalised for the Blues as the half-hour marked ticked over, capitalising on turnover ball and showing good pace to score in the corner.

But the try went unconverted, and a Marty McKenzie penalty soon after gave the lead back to the Chiefs.

It changed hands again two minutes out from halftime following quick work from an attacking scrum, Melani Nanai showing impressive strength in the tackle to force the try and give the Blues a 10-8 halftime lead.

The second half turned into something of an arm wrestle - one the Blues won, thanks to some grim defending and tries to prop Ofa Tu'ungafasi and replacement lock Gerard Cowley-Tuioti.