Latest - The Waikato Bay of Plenty Magic have given captain Casey Kopua a fitting farewell, beating the Northern Mystics 61-52 in the ANZ Netball Premiership.

Kopua has been the backbone of the Magic team for 17 years.

The Magic started strong and finished the first half 35-25 ahead.

The Northern Mystics went on the counter attack in the third quarter, winning it 16-10 but the Magic withstood the onslaught.

NZ women's sevens through to quarter-finals

The New Zealand women's sevens team have qualified for tomorrow morning's quarter-finals at the Canadian leg of the World Series after going through pool play unbeaten.

The side is looking for redemption in tomorrow morning's finals.

New Zealand currently top the standings, but finished in a disappointing 5th place in last month's Japan leg after a draw to Russia, a loss to France then a quarter-final loss to the USA.

The captain Sarah Hirini said the Japan round was disappointing but felt her side were back on track.

All Blacks loose forward Liam Squire's comeback from injury has been delayed for another few weeks as he deals with "personal issues" that have ruled him out of the Highlanders' Super Rugby trip to South Africa.

Battling hip and knee problems, the blindside flanker has not played a competitive game since facing Ireland for the All Blacks in November.

Highlanders head coach Aaron Mauger told local media that Squire would stay at home to deal with "personal, family issues" after yesterday's 32-27 win over the Jaguares.

"It's important that our boys are in the space to play the games and at the moment Liam's got to attend to a few things that he needs to deal to," he said.

Fellow All Black Jackson Hemopo, who sustained a knee injury last week, has also been ruled out of the South Africa games.

All Blacks winger Waisake Naholo, who also suffered a knee injury a month ago, has been cleared to tour.

Starting from second on the grid, the 38-year-old fought to the front about halfway through the race.

He was in control until the closing laps when Frenchman Simon Pagenaud started to reel him in. A mistake with a lap and a quarter remaining cost the veteran as the Frenchman passed to take the lead and the chequered flag.

Dixon was second for the third time this season, with Britain's Jack Harvey third.

Dixon climbs from third to second in the overall standings behind Josef Newgarden.

England batsman Jos Buttler smashed an unbeaten 110 off 55 balls as the hosts beat Pakistan by 12 runs in a thrilling run-packed second one-day international in Southampton.

Buttler's blitzkrieg and half-centuries by Jason Roy, Jonny Bairstow and skipper Eoin Morgan helped England to a huge total of 373 for three wickets in 50 overs.

Pakistan, who made their best ever score when chasing in ODIs, fell short despite Fakhar Zaman's superb 138 as the hosts took a 1-0 lead in the five-match series after the first game was washed out.

Asked to bat first on a flat pitch, England laid a solid platform for Buttler to build on, with Roy scoring 87 and Bairstow 51 in a 115-run opening partnership.

Joe Root fell for 40 following a brief rain interruption, bringing Morgan and Buttler together and the pair put on 162 for the fourth wicket with the captain contributing an unbeaten 71 off 48 balls. 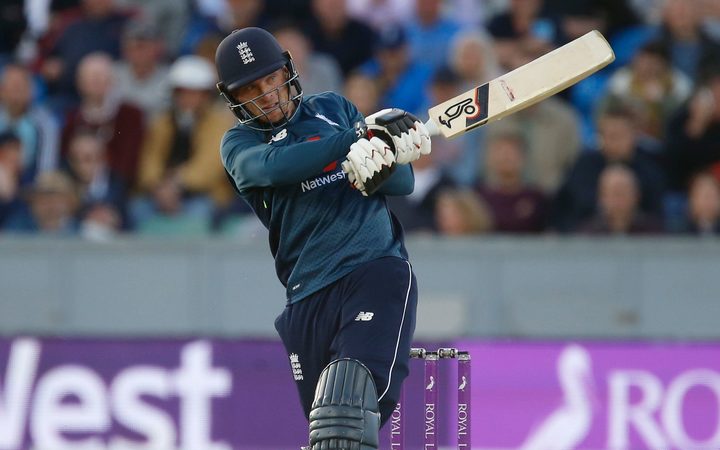 English club Saracens were crowned champions of European club rugby for the third time in four years as they came from 10-0 down to beat last year's winners Leinster 20-10 in a ferocious final.

The Irish side, who beat Saracens in the quarter-finals last year and were seeking a record fifth triumph, found their rhythm first and a try for Tadhg Furlong put them 10-0 up, only for Saracens to force their way into the game with a brilliantly-created Sean Maitland try to make it 10-10 at the break.

Both sides defended ferociously in a brutal third quarter but Saracens took advantage of a yellow card for Scott Fardy as another Owen Farrell penalty and a try by Billy Vunipola off the back of a scrum made it 20-10 to the London side.

Saracens were able to play out the remainder of the game largely in the Leinster half and see out the victory.

Formula One leader Valtteri Bottas has put his Mercedes on pole position by a massive margin at the Spanish Grand Prix with teammate Lewis Hamilton having to settle for second in a front row lockout.

The pole was the third in a row for the re-energised Finn, who leads Hamilton by a single point after four of the 21 races, and he did it in a track record time of one minute 15.406 seconds.

That was a hefty 0.634 quicker than Hamilton's best effort, dashing the five-times world champion's hopes of record-extending 85th career pole.

Dutchwoman Kiki Bertens has won the biggest title of her tennis career, beating Simona Halep in straight sets in the Madrid Open final.

World number two Halep would have gone top of the rankings had she won.

The Greek 20-year-old had never won a set in his previous three meetings against claycourt specialist and 11-times French Open champion Nadal.

Stephen Curry and Klay Thompson combined for 60 points, and the visiting Golden State Warriors pulled away late in Game 6 to claim their Western Conference semifinal series with a 118-113 victory over the Houston Rockets.

The Warriors prevailed in the finale of the best-of-seven series despite playing without their leading scorer this post season, Kevin Durant, sidelined due to a calf injury. Durant's status is uncertain ahead of Game 1 of the Western Conference finals in Oakland, California, on Tuesday against the Portland Trail Blazers or the Denver Nuggets.

"Obviously, we just wanted to win the series, but this is ideal," Warriors coach Steve Kerr said. "Probably give the players the weekend off to recuperate.

"We'll have at least the next few days to prepare and recover, so this was a huge one for us tonight, especially considering the minutes (the) starters played this series."

Curry, scoreless on 0-for-5 shooting in the first half, sank a pair of dagger 3-pointers down the stretch of the fourth quarter and posted 33 points. He was 8-for-8 from the foul line in the final 30.4 seconds, and he finished with 23 points in the fourth.