Wing Sevu Reece scored a hat-trick of tries and Richie Mo'unga bagged a brace as the Crusaders made light work of the Bulls with a comprehensive 45-13 Super Rugby victory at Loftus Versfeld. 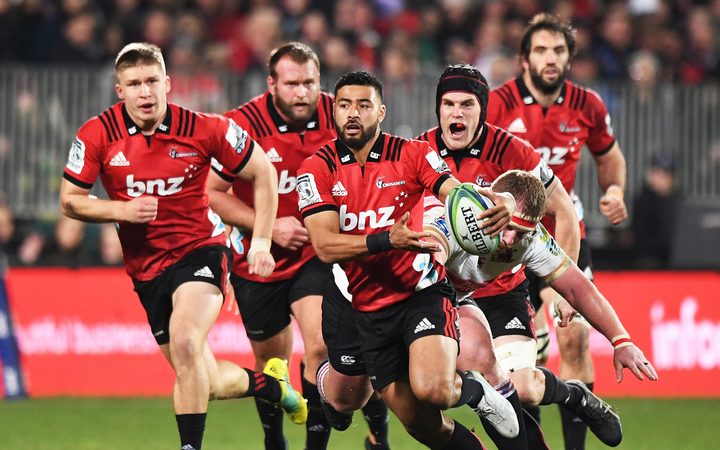 The defending champions ran in seven tries, were incisive on attack, and preyed on the numerous errors and soft tackling of the home side.

First-five Richie Mo'unga was named man of the match.

He bagged a brace of tries, and was masterful in steering the Crusaders attack, to go with scores from locks Mitchell Dunshea and Scott Barrett.

Centre Burger Odendaal crossed for the lone try for the Bulls, who went into the weekend on top of the South African Conference and now face a four-match tour of Australasia.

"We had a good week's preparation here and had a good plan going into the game. It's always pleasing when you can execute that in the game," Crusaders captain Matt Todd said at the post-match presentation.

"We knew we were going to hurt out there, but at crucial times we were able to get points and our defence was pretty good too. Our plan coming in was to push ourselves and play at pace, so credit to the boys."

The Bulls had no answer to the creativity of the Crusaders in the opening half as the visitors kept the tempo high, a risky strategy at altitude, and ran in four tries to lead 26-6 at the break.

Mo'unga was at the heart of most of their good play with penetrating running as he profited from a kind bounce to cross for his first try, and then scythed through a limp home defence to score his second.

Second rower Dunshea showed great pace and determination to run in from 35 metres and cross in the corner for his first Super Rugby try, while Reece had an easy score when the Crusaders created a massive overlap on the right and gave the wing a simple opportunity to finish.

It was more of the same at the start of the second period as the Crusaders continued to dominate territory and the flat-footed Bulls defence was bamboozled by a fine step from Reece, who crossed for his second.

There was some reprieve for the home side as a period of sustained pressure inside the Crusaders 22 ended with Odendaal crossing under the posts.

But the Crusaders regained the momentum when Mo'ungaG��s brilliant kick across the field was perfect for Reece to pluck the ball out of the air and secure his hat-trick.

The final score came from Barrett as he barged through more limp home defending following an attacking lineout.

"You have to give credit to the Crusaders, they are an unbelievable rugby side and every week they produce these performances," Bulls captain Handre Pollard said.

"If you give them momentum it's just quick ball, quick ball and you are on the back foot the whole time. But we know New Zealand sides play that way."