Kodi Nikorima's introduction can't come quickly enough for the Warriors who have slumped to a fourth-straight NRL loss, outclassed 36-18 by a methodical Newcastle in Auckland. 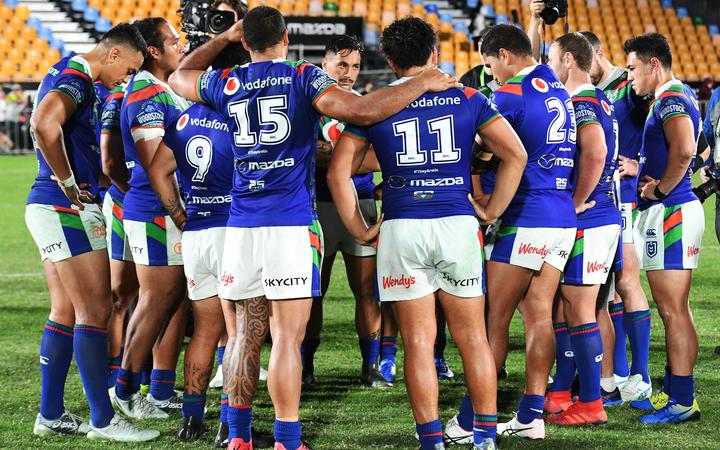 The Warriors reflect on their loss to Newcastle at Mt Smart Stadium. Photo: Andrew Cornaga/Photosport

The Knights dominated up front on Sunday at Mt Smart Stadium to set up a second-consecutive win, providing more evidence of clicking after a five-match losing streak.

As with last week's 28-14 win over Parramatta, Newcastle's victory was built on control from Mitchell Pearce and the relentless charges of their big men led by NSW State of Origin star David Klemmer, who racked up 195 metres.

Their completion rate was perfect in the first half and they finished stronger than a Warriors side whose propensity for late fades is becoming endemic.

Newcastle's dominance was sealed by the game's final try when Pearce sent fullback Kalyn Ponga clear from the halfway line.

It capped a mixed outing for star fullback Ponga, whose hyped clash with opposite Roger Tuivasa-Sheck amounted to little.

Tuivasa-Sheck was subdued on return from a hamstring injury, while Ponga's main contribution came via the boot, landing eight of nine shots at goal.

The young Knights' star was also placed on report for a tripping incident.

A poor Warriors side lacked direction again. They will hope new halves signing Nikorima can make a difference next week in his likely debut.

Blake Green and Tuivasa-Sheck had little impact in their injury comebacks, with Green lacking the armchair ride enjoyed by Pearce.

Pearce darted through a staggered Warriors defence to score the game's opening try and his later pinpoint bomb was claimed by a leaping Shaun Kenny-Dowall to bag the Knights' second.

The Warriors responded each time, firstly when centre Patrick Herbert sliced through for his maiden first-grade try and when winger Ken Maumalo scored via a neat Peta Hiku bat-down.

Warriors left-side pair Hiku and Tohu Harris went from heroes to villains soon after the break.

The pair's quick hands set up Maumalo for his second but they both made feeble tackle attempts on Sione Mata'utia, whose try put the visitors 24-18 ahead.

Hymel Hunt and Ponga bagged the final tries to improve Newcastle's record to 3-5 while the Warriors drop to 2-6.