The Pulse remain unbeaten at the top of the ANZ Netball Premiership after a 62-44 win over the Tactix in Christchurch.

It was the 11th straight win for the Pulse, who completely dominated the two middle quarters by finally "kicking into gear", as captain Katrina Rore succinctly put it after the match. 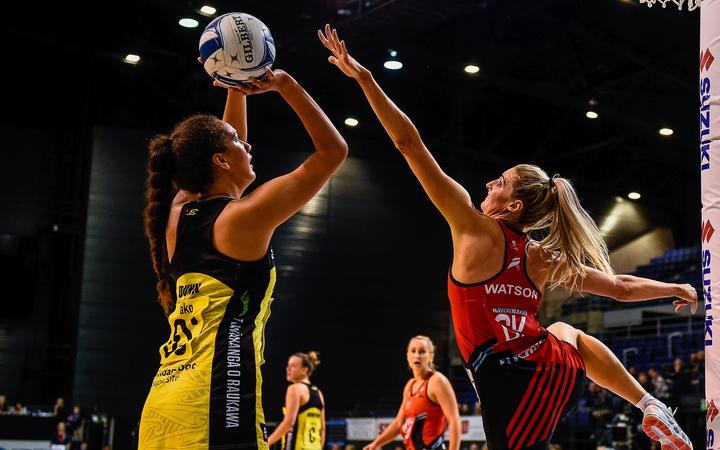 If there was any consolation for the Tactix, it came from taking the first and last quarters off the mighty Pulse.

The Tactix hung in there for the entire first quarter with some exceptional defence right through the court, but led from the back by captain Jane Watson and Sophia Fenwick.

Watson restricted the usually prolific Aliyah Dunn to just four shots on goal, but Pulse goal attack Ameliaranne Ekenasio did not mind taking on the lion's share of the shooting.

Meanwhile Tactix goal shoot Ellie Bird stood strong in the face of some intense attention from the Pulse defenders, and didn't miss a shot in the first 15 minutes.

The Tactix took a two-goal lead halfway through the quarter, and could have extended that with a little more patience, but were still in front 12-11 at the first break.

The Pulse took the lead five minutes into the second spell, when they began to tighten up on defence and made fewer mistakes. As Dunn made more space to breathe, the Pulse scored five in a row, and ran away with the second quarter 16-9.

The Pulse looked like their old selves, up 27-21 at halftime, and accelerated away as soon as they returned to the court.

Player of the match Whitney Souness and Claire Kersten took ownership of the midcourt for the Pulse, and put in some superb quick passes to Dunn (who ended the game with impressive figures of 36 from 38 attempts).

The Tactix brought Kate Lloyd into the defensive circle with Watson to try to break the Pulse's stranglehold. But it was on attack where the Tactix struggled to string a sequence of passes together that would end in goals.

The Pulse completely conquered the home side in the third quarter (22-9), to take a virtually unassailable 49-30 lead into the final stanza.

Pulse coach Yvette McCausland-Durie used the opportunity to introduce three of her young players - Tiana Metuarau, Maddy Gordon and Elle Temu - to the court for experience.

The Tactix salvaged some pride by winning the last quarter by one, and Bird went home with the most goals scored, 39 from 42 (93 percent). But again, she found no shooting support from her goal attacks.