The return of an influential All Blacks trio has sparked the Hurricanes to an emphatic 47-19 Super Rugby win over the Chiefs in Wellington. 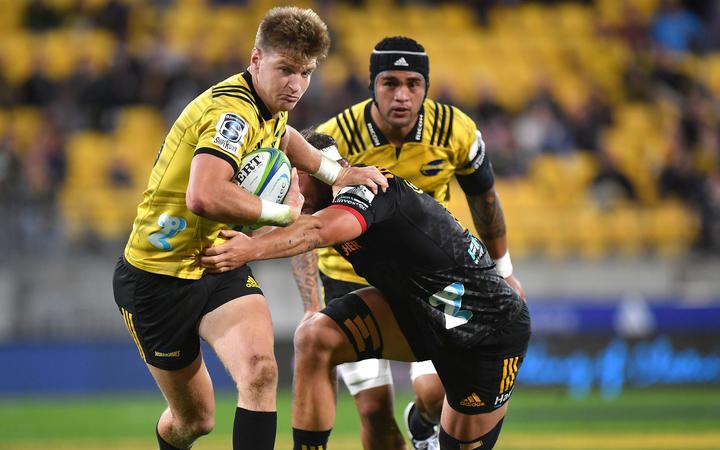 Jordie Barrett, brother Beauden and flanker Ardie Savea returned from an All Blacks rest week to fire up the Hurricanes, who could only draw 23-23 with the Chiefs at their last meeting in March.

Jordie reminded All Blacks coach Steve Hansen of his World Cup aspirations as Hansen looks at the makeup of his back three for the tournament in Japan after utility back Damian McKenzie ruptured a knee ligament and was ruled out for the rest of the year.

Jordie, who has played fullback and on the wing for the All Blacks, reminded Hansen of his own credentials in the No.15 jersey in his first appearance there for the Hurricanes since week two. He finished the game in the midfield, where he has played twice this season.

The Hurricanes, coming off a narrow 29-23 win away to the Sunwolves last week, blitzed out to a 21-0 lead after just 17 minutes in blusterly conditions at Westpac Stadium, Jordie Barrett stamping his mark early with tries in the fourth and seventh minutes.

Young flanker Kane Leaupepe added a third after 17 minutes, and with Beauden Barrett's conversions, the Hurricanes looked to have the game well under control.

The Chiefs, upset 23-17 by the Lions in Hamilton last weekend, showed real resolve to battle back, blind-side Luke Jacobsen and wing Ataata Moeakiola scoring inside four minutes to narrow the Canes lead to 21-12 as the half-hour mark approached.

Halfback TJ Perenara restored a more comfortable margin for the Hurricanes after impressive work from Vaea Fifita and Chase Tiatia, and the home team took a 28-12 lead into halftime.

Chiefs flanker Lachlan Boshier crashed over three minutes after the restart to narrow the Hurricanes lead to nine, but Wes Goosen and Savea crossed within four minutes to restore the Canes' comfortable lead.

The Hurricanes were clinical in controlling the remainder of the match, 22-year-old replacement winger Salesi Rayasi crossing late to complete the emphatic seven-try win.

The win means the Hurricanes keep their grip on second place in the New Zealand conference, with their chances of a home playoff game looking promising.