Latest - Liverpool has regained its place at the top of the English Premier League with a 2-0 win at Cardiff City that restored its two-point lead over Manchester City. 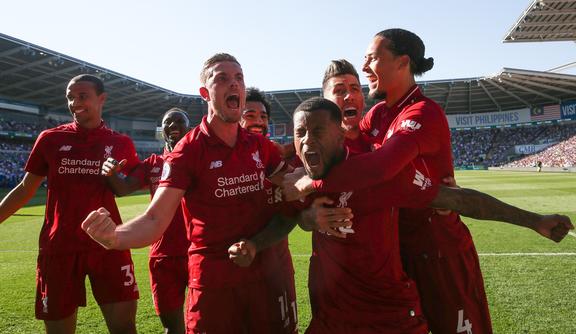 Liverpool, who have lost just once in the league all season, have 88 points while City, who beat Tottenham Hotspur 1-0 on Sunday, are on 86 but have a game in hand.

That extra game for City will be played on Thursday when Pep Guardiola's side travel to Old Trafford to face Manchester United and the champions will make the short trip with the pressure firmly back on.

Georginio Wijnaldum broke the deadlock for Liverpool with a first-time strike from a clever short corner from Trent Alexander-Arnold. Sean Morrison then missed a golden opportunity for relegation-threatened Cardiff to equalise, making a hash of a header when he had an open goal at his mercy.

Late in the game, Morrison was judged to have pulled down Mohamed Salah in the box and substitute James Milner converted the 81st minute penalty to make sure of the crucial three points for Juergen Klopp's side.

Cardiff remain in the relegation zone, three points from safety.

Crystal Palace also dented Arsenal's top-four hopes with a 3-2 away win and Everton thrashed Manchester United 4-0 in the other games.

Former Tall Blacks centre Sean Marks has been suspended by the NBA for one game and fined 25 thousand US dollars.

The Brooklyn Nets general manager entered the referee's locker room after the Nets lost to the Philadelphia 76ers in game four of their first round NBA playoff series.

The Nets' Jared Dudley and 76ers' Jimmy Butler were ejected from the game after a melee erupted in the third quarter.

76ers centre Joel Embiid delivered a hard foul to the Nets' big man Jarret Allen and Dudley charged at and pushed Embiid, leading Butler, Simmons and other players, coaches and a referee to step in.

Marks will serve his suspension on Wednesday when the Nets and 76ers play game five in Philadelphia.

Steven Adams and his Oklahoma City Thunder team are teetering on the edge of elimination from the Western Conference NBA play-offs after their game four loss to the Portland Trail Blazers. 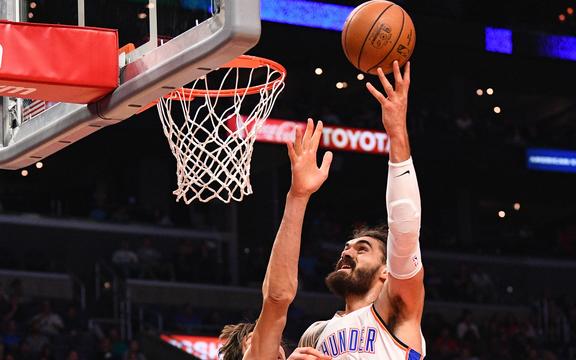 They had suffered back-to-back away losses in the opening two games, but bounced back in game three on Saturday with a 120-108 win in Oklahoma City.

Adams had a subdued match, ending with six points and seven rebounds.

The Trail Blazers now lead the best-of-seven series 3-1 and can wrap up a semi-finals spot with a win in game five on Wednesday in Portland.

Kevin Durant scored 33 points and the visiting Golden State Warriors held on to beat the Los Angeles Clippers 113-105 in game four of their first round NBA playoff series. 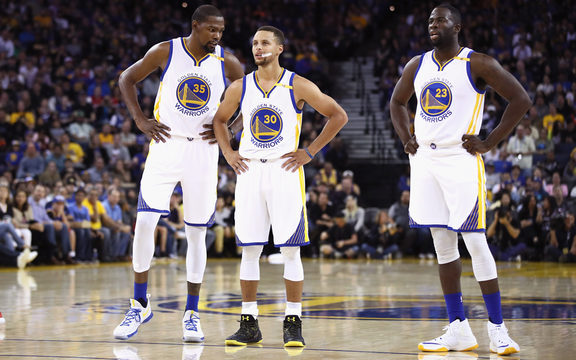 After winning both games in Los Angeles, the Warriors own a 3-1 series lead heading to Game 5 on Thursday (New Zealand time) in Oakland.

Klay Thompson scored 27 of his 32 points in the first half for the Warriors. Stephen Curry shot 3-for-14, including 1-for-9 from 3-point range, finishing with 12 points, 10 rebounds and seven assists.

The Boston Celtics are the first team through to the second round of the NBA playoffs.

Williamson lacking time out in the middle in IPL

Black Caps captain Kane Williamson has taken a back seat as his Hyderabad side has thrashed Kolkata by nine wickets in the Indian Premier League. 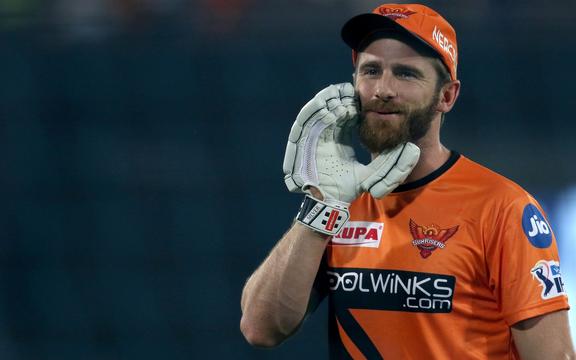 He has finished unbeaten on eight, after David Warner and Jonny Bairstow had shared in a 131-run opening stand.

Warner smashed 67 from 38 balls, while Bairstow struck an unbeaten 80 from 43 deliveries.

Williamson has had just four innings in the IPL this season, with a high score of 14.

Hyderabad's up to fourth on the ladder.

The New Zealand women's sevens team has finished fifth in Japan to remain atop the World Series standings. 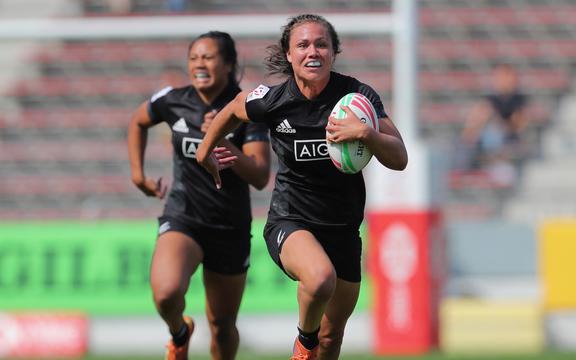 The Black Ferns Sevens have beaten Olympic champions Australia 34-26 in the fifth place playoff to sit six points clear of Canada with two tournaments to play.

Canada picked up the winner's points when scoring in the last play of the final to beat England 7-5.

New Zealand earlier lost 26-19 to the USA in the cup quarter-finals before thrashing Russia 36-nil in its fifth place playoff semi-final.

The fifth leg of the six-leg series will be played in Langford, Canada on May 11-12.

Lee off the pace in South Carolina

New Zealand golfer Danny Lee has finished in a share of 41st place at this week's PGA Tour tournament in South Carolina. 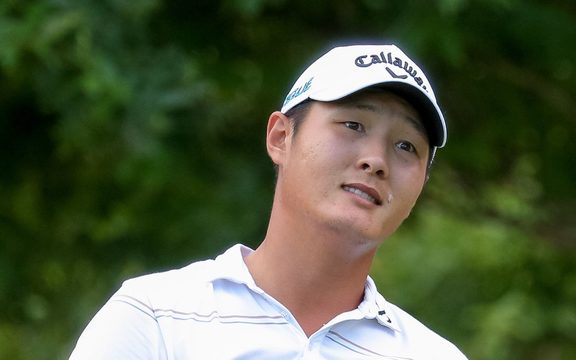 He's closed with a one-over 72 to finish one-under par for the tournament.

Taiwan's C.T. Pan has broken through for his maiden win.

He's finished atop the leaderboard at 12-under par, 11 shots ahead of Lee.

Danny Lee is projected to drop three places to 45th in the PGA Tour standings.

Flamboyant Italian Fabio Fognini followed up his shock victory over Rafael Nadal with a 6-3 6-4 win over Serbian Dusan Lajovic to claim his maiden Masters title in Monte Carlo. 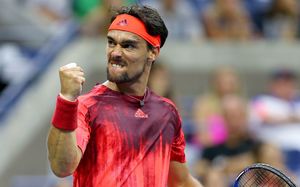 Fabio Fognini celebrates his upset over Rafael Nadal at the US Open crop Photo: AFP

The 31-year-old triumphed despite suffering from an apparent muscle problem to became the lowest seeded player, at 13, to claim the title since Gustavo Kuerten in 1999.

Lajovic, who had not lost a set this week before Sunday, did not have the weapons to counter Fognini's tactical nous.

Sexton leads Leinster back to the European Cup final

Johnny Sexton returned to action and top form to lead holders Leinster to the European Champions Cup final, outclassing Toulouse 30-12 in a clash of the competition's two most successful teams. 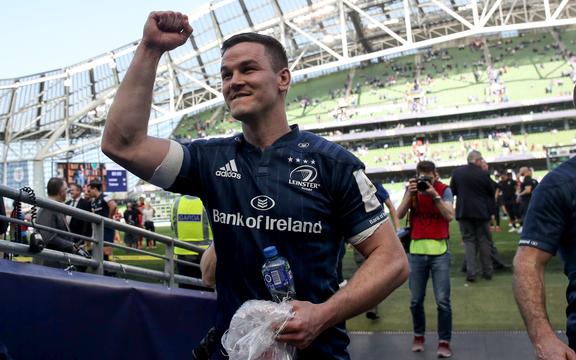 The Leinster captain, who had not played for the province this year and was out of form at the Six Nations, looked back to his old self at the Aviva Stadium, controlling possession and kicking near flawlessly in a man of the match performance.

Two Scott Fardy tries and one for James Lowe mean Leinster will take their bid to surpass Toulouse and become the first team to win five European titles to St James' Park, Newcastle on May 11 where they face Saracens, champions in 2016 and 2017.

"We knew Toulouse had four stars on their jersey but Sarries have two and were superb against Munster yesterday, so we know we're going to be up against it," Sexton said in a pitchside interview after one of his side's best performances of the year.

Broncos continue their poor start to the NRL season

The Brisbane Broncos have slumped to their worst start to an NRL season this century.

The Broncos' 26-22 loss Canberra means the powerhouse club have won just one of their opening six games for the first time since 1999.

In contrast, the Raiders have now won five of their opening six matches to make their best start to a season since 2003.