The Warriors have lost proven try scorer David Fusitu'a to injury at a time when finishing their chances is emerging as their biggest problem in the NRL. 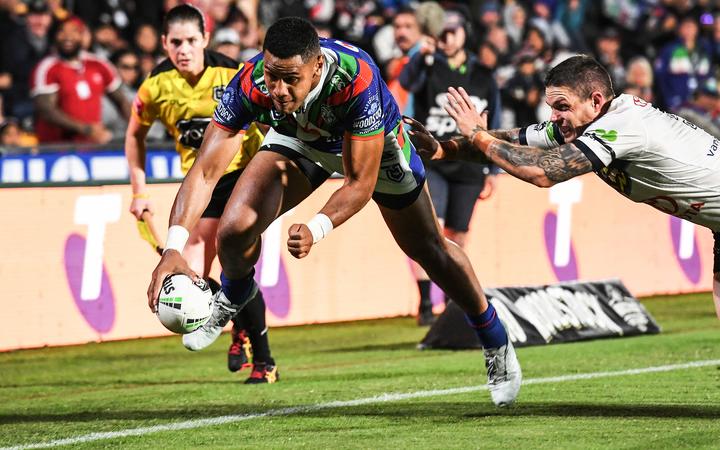 David Fusitu'a dives for the try line and a disallowed try against the Cowboys. Photo: Photosport

Fusitu'a suffered rib damage and was forced off late in the 17-10 loss to North Queensland on Saturday, leaving him highly unlikely to face the Storm in Thursday's Anzac Day match.

The winger, who scored a competition-leading 23 tries in 2018, will be keenly missed by a Warriors team failing to make the most of promising attacking work.

Heading into round six, the Auckland-based club led the NRL for linebreaks and top three for tackle busts and offloads.

Yet they sat mid-table for tries scored, with that lack of finishing exposed against the Cowboys, who made the most of fewer opportunities at Mt Smart Stadium.

"It's one that we let slip. We did some really good things out there but lacked composure at times," Warriors coach Stephen Kearney said.

"We had close to double the tackle breaks but if you're not executing the final pass, that sort of stuff builds up. We frustrated our way into making it worse."

The direction of Blake Green was missed, as it was in last week's narrow loss to South Sydney.

Kearney was hopeful the veteran half will return from a groin injury for a daunting match in Melbourne.

The Warriors were thrashed 50-10 by the Storm in the equivalent fixture last year a five-day turnaround.

Ominously, Fusitu'a scored their only two tries that day.

"We came off a really good win against the Dragons into a really tough match which we anticipated against Melbourne, and we weren't ready for that.

"But we will be ready for this one."