New Zealand sailors collected two medals last night with a chance of winning another tonight as the Hempel World Cup Series regatta in Genoa comes to a close. 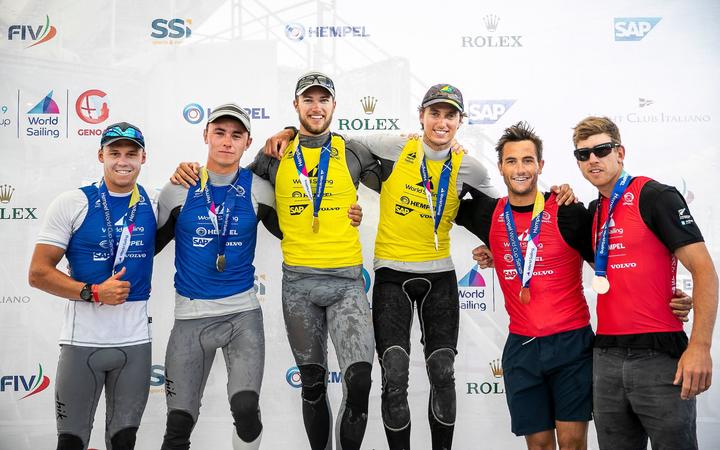 Isaac McHardie and William McKenzie won silver in the 49er, finishing just ahead of Peter Burling and Blair Tuke in third. Paul Snow-Hansen and Dan Willcox rocketed up the standings from 14th to second in the men's 470 overnight and have a good chance of winning New Zealand's third medal at this regatta.

It would represent a decent haul at what has been a treacherously difficult regatta, with light winds, postponements and abandoned races besetting the event.

The strong New Zealand 49er squad once again showed their depth, with all four finishing inside the top 20 in Genoa.

McHardie and McKenzie, the youngest combination among the quartet, went into the medal race in fourth but climbed into silver medal position by finishing second in the top 10 medal race.

"The points were pretty close [going into the race] so our goal today was to race the best we could and hope the points fell into place," McKenzie said. "We are pretty happy to take out silver.

"With the past week of racing in such light and fickle conditions, it was extremely important to stay calm and focused. We are extremely happy with how we performed at this regatta and hope to carry this form to upcoming regattas."

Burling and Tuke also walk away from Genoa satisfied after their first World Cup Series regatta in three years.

They had ambitions of winning gold, having gone into the medal race in second and only six points behind Australian brothers David and Lachy Gilmour, but were always playing catchup after a difficult start.

"We're a little bit disappointed not to have put a better race together... and after the start we didn't give ourselves a good opportunity to do that," Tuke said.

"Nevertheless, we fought hard and it's still nice to get a medal, whatever the colour, especially here because it has been a tricky week and we're just back in the boat.

"Things are coming back [to us] pretty fast. There are things we are not doing as well [as in the last Olympic campaign] and other things we are probably doing better. It's all putting it together that we are struggling with at the moment. But we still got third and there's plenty of improvement so we are pretty happy and looking forward to getting more races under our belt. We are loving sailing back in the 49er."

Snow-Hansen and Willcox enjoyed their day in the men's 470 on the back of a first and fifth in their two races. They are now three points behind Zangiun Xu and Chao Wang of China going into their medal race and also hold a seven-point buffer on third.

"We finally got off the line in good shape, making clean lines a lot easier," Snow-Hansen said.

"We're looking forward to the medal race. Fingers crossed we get some breeze."