Peter Burling and Blair Tuke will be in familiar territory tonight when they race for a gold medal at the World Cup Series regatta in Genoa. 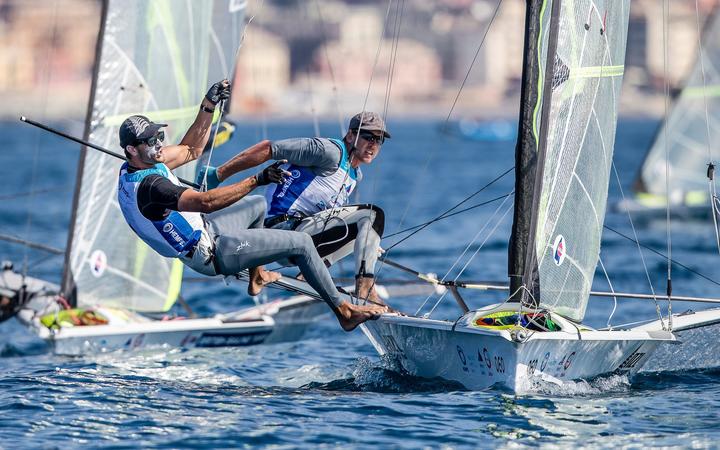 The Olympic and four-time 49er world champions are second heading into the top 10 medal race, six points behind Australian brothers David Gilmour and Lachy Gilmour. But a gaggle of others are not far behind and, with double points at stake, any one of the top five boats will fancy their chances.

Among them are fellow Kiwis Isaac McHardie and William McKenzie, who are fourth but only two points adrift of Burling and Tuke. It's an illustration of the strength of the New Zealand 49er programme to have two chasing a medal and two other boats finished in the top 20.

Burling and Tuke started the day in 10th but jumped up the standings on the back of a second, ninth, fifth and 22nd in today's four races. They enjoyed the best wind conditions of the week - a steady 6-9 knot westerly which ensured 41 of the 42 races scheduled for the day were completed.

"It was another light-air day which has been the story of the week," Tuke said.

"Three of the four races were good and that was enough for us to move up into second overall. There are always what ifs and missed opportunities on days like today but, all in all, pretty good for us.

"We have a few points to make up on the Australian guys and it's really close behind us so we will have our work cut out for us but we are looking forward to putting down a good race and finishing off what has been a pretty good week for us in challenging conditions."

It has also been a good week for McHardie and McKenzie, who bounced back well today after a couple of bigger scores yesterday, banking a third, fifth, ninth and 19th.

The pair, who are members of Yachting New Zealand's Aon Fast Track programme, which aims to accelerate the development of potential Olympians, have sailed consistently well all week to put themselves in contention.

"Isaac and I are pretty happy with how we went today," McKenzie said.

"We had a plan and managed to execute it well in three out of the four gold fleet races.

"We are excited to be in medal contention and will give it a good nudge tomorrow."

Gemma Jones and Jason Saunders will also contest their medal race in the Nacra 17, qualifying in 10th position. It represents another solid week for the pair, particularly in what has been treacherously-light conditions and after recovering from a start-line disqualification in their opening race of the regatta.

It wasn't Alex Maloney and Molly Meech's week and the pair, who started the year well with two silver medals in their last two regattas, were 23rd in the 49erFX.