The Chiefs have suffered a surprise 23-17 Super Rugby defeat to the Lions in Hamilton. 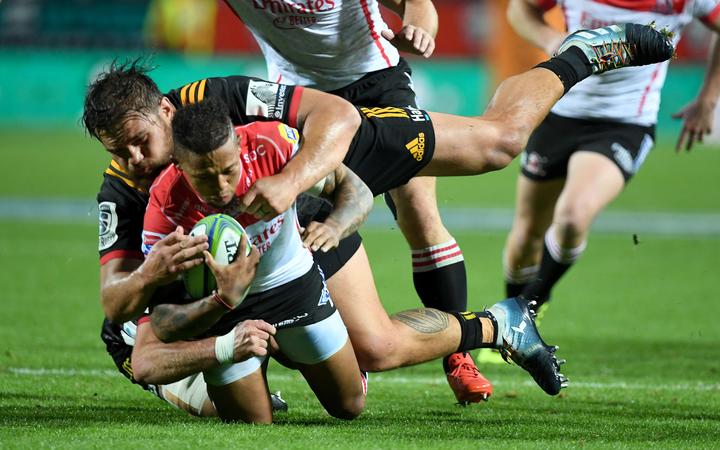 The last time the two sides met was Round two 2016, where the Lions also came out on top, beating the Chiefs for the first time in Hamilton.

The Lions were dominant for most of the match, their defence and set piece key to the victory. However, after being shut out for the opening 60 minutes of the encounter, the Chiefs came to life and got close to stealing the victory.

The visitors had a disruptive build-up to the game, with their head coach Swys de Bruin returning to South Africa due to personal reasons. Ivan van Rooyen took over the head coaching reins and would have been delighted with the performance from his side, who were desperate for a win, after slipping to the bottom of the South African conference.

It was the Lions who well and truly controlled the first half in Hamilton, predominantly through their set piece. Elton Jantjies, who along with hooker Malcolm Marx, were late inclusions in the starting side, opened the scoring with a couple of penalty kicks.

The Lions scrum was causing all sorts of problems for the Chiefs in the first half, and the Lions were quick to pounce on the errors. Jantjies opted to kick for the corner rather than take another three points in the final stages of the opening spell, and it paid off. Prop forward Carlu Sadie barged his way to the try line.

The Lions struck again just before the break, this time through winger Aphiwe Dyantyi who successfully kicked and chased, sprinting his way along the sideline to score on half time. The visitors taking a handy 20-0 lead into the sheds.

The Chiefs certainly had their opportunities in the first half, but several handling errors and some ill discipline meant they were unable to convert.

The Lions were just as threatening in the opening stages of the second spell and their defensive structures continued to hold out the Chiefs. But a sneaky little pick and go from skipper Brad Weber started the comeback for the home side. Sean Wainui scored off Weber's burst and two minutes later the Chiefs were over again thanks to prop Nepo Laulala.

The momentum completely swung towards the Chiefs and it didn't take long for them to score again. Marty McKenzie kicked into space and a good bounce and support play allowed Tumua Manu to score the Chiefs third try of the half.

The Lions were then able to hold onto possession and a Jantjies drop kick all but secured victory for the visitors. They held the Chiefs out in the final minute and like Round 2 in 2016, kicked the ball into touch to claim their second straight win over the Waikato franchise.

Inspirational Lions skipper Warren Whiteley played a massive role for his side in his 78 minutes. It's his first game back from injury since Round 2.

The Chiefs fullback crisis, however, has gone from bad to worse. After losing Damian Mckenzie earlier this week, replacement fullback Jack Debreczeni was stretchered from the field at halftime, with what appeared to be a neck injury later determined as concussion.

The Chiefs will have a lot of work to do on their set piece during the week as they eye up another New Zealand derby against the Hurricanes in Wellington.

"We just have to really think about our game and our game is poor," says Coach Colin Cooper

"It's been a disruptive week no doubt about that but still a good enough group to perform better than that, we gave them the ball 21 times."

"we will regroup and see what went well to prepare for the Hurricanes."