Israel Folau's rugby bosses have met with the under-seige player, but are still intent on sacking him following his social media post that said gay people would go to "hell" if they did not "repent". 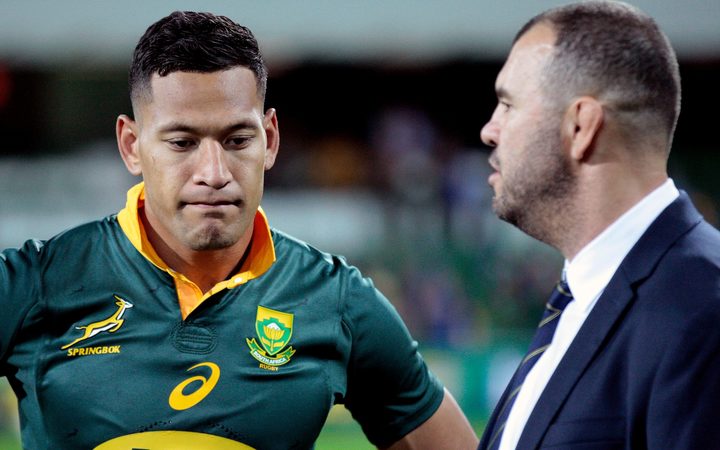 Rugby Australia said yesterday that Folau would be sacked if he could not offer a good reason for the post.

RA and the NSW Rugby Union met with Folau in Sydney today, later releasing a statement saying their joint position regarding the 73-Test Wallabies player was unchanged.

As the meeting was held in confidence, Rugby Australia and the NSW Rugby Union said they would not comment further.

"Following today's meeting, the two organisations will update their respective boards on the matter to consider next steps," they said in a statement.

"Our joint position regarding Israel Folau is unchanged."

An Australian television news channel questioned Folau on the street after the meeting. He declined to answer.

The 30-year-old fullback, a fundamentalist Christian, escaped sanction when he posted similar comments last year but RA took a much harder line when, having repeatedly warned him against it, the offence was repeated on Wednesday.

The multi-million dollar contract Folau signed in February looks certain to be torn up unless he can convince his employers that there are "compelling mitigating factors" for sharing the post.

There has been heavy fallout, with numerous media columnists opining on what the decision meant for the country and Australian politicians wading in.

Prime Minister Scott Morrison, who is a Pentecostal Christian like Folau, said it was a decision for RA to make.

"Israel's comments were insensitive and it's important that when you're in public life, you're just very mindful of being sensitive to other Australians and that you speak with that empathy," he said.

"There is no freedom to perpetuate hateful speech," he told reporters in Sydney.

"Some of the comments which have been seen are far closer to hateful than I think appropriate for what people should be doing on social media."

"It has nothing to do with Israel, or rugby, or religion, homosexuals, or whatever. Where are we in this country on free speech?" he said.

"We've got an issue here because we're going down a very, very narrow road here."

Folau's chances of switching back to rugby league in Australia were also dashed late on Thursday with the governing body, the Australian Rugby League Commission (ARLC), ruling out any return to the sport.

"And after talking to some commissioners tonight (Thursday), we don't support him playing rugby league again."

His best chances therefore lie offshore, although the chances of joining French club Toulon appear to be non-existent with their outspoken owner Mourad Boudjellal criticising him in an interview in French newspaper L'Equipe.