Just two days after winning the biggest basketball match of his life, New Zealander Jack Salt was back studying at the University of Virginia as he prepares to graduate from college. 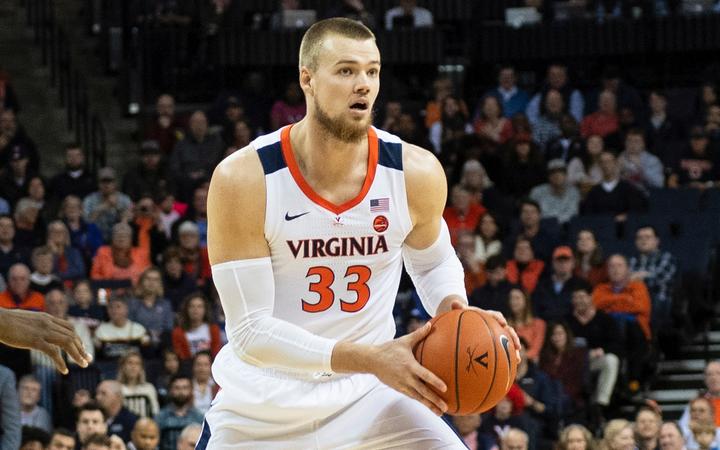 Salt was part of the Virginia Cavaliers' men's basketball team that captured its first national title on Tuesday, beating Texas Tech 85-77 in overtime at US Bank Stadium in Minneapolis.

Playing the final in front of 70,000 fans on a makeshift basketball court in a football stadium took some getting used to, but Salt said it didn't take long to find his rhythm.

"To play in that kind of arena, to walk out onto the floor an extra 40 metres to the court was a different experience.

The 23-year-old center only played four minutes of the match, pulling in one rebound, but he said he wasn't upset with his lack of game time.

"I'm here for the team - this team has done a lot for me, I would've like to play more but I ... wasn't going to sulk or complain about it. I was just happy that our team was able to go all the way and get the win," Salt said, reflecting on the performance.

Buying into that team-first, individual-second culture has been imperative to the Virginia Cavalier's success, Salt said.

Last year the Cavaliers finished the regular season as the top seed, only to be unceremoniously dumped out of the first round of March Madness' final 16 by the 16th seed.

Welcome home the NATIONAL CHAMPIONS! @UVAMensHoops will arrive at JPJ about 4:45pm The Cavalier Team Shop is also open today in JPJ until 7pm with championship gear.
Large community celebration will be Saturday at 2pm at Scott Stadium.
Details: https://t.co/jq4uN3BYGT#GoHoos pic.twitter.com/zzS6vZlXIb

This year was about redemption, sealing the first seed again and then going all the way to the title and that all important championship ring.

Salt and his teammates won't receive their rings for another few weeks yet. Before that, the celebrations will continue as well as his studies.

Coming to the end of his time at college, Salt is finishing up the last of his papers in his undergraduate study of Anthropology and his masters in Education.

"I've missed a lot of school over the last four weeks, I've got a lot of work to catch up on, but I'm not complaining. Winning a national championship, it was definitely worth it."

Once his college days are over, Salt plans on taking the next step in his life - becoming a professional basketballer.

He plans on getting an agent and pursuing a basketball career in either the US, Europe or down under in the Australian National Basketball League.

"Right now I'm just really open to anything and looking forward to the future."

However, he said he'll never forget his time at the Unversity of Virginia.

"I've met some of my best friends at the University of Virginia, that might be the biggest thing honestly, just the people I've met while I've been here will be my life long friends.

"That might be the biggest thing I'm going to take away from my time here."