Israel Folau won't be welcome back in the NRL with the code set to deny the disgraced star a return to the sport. 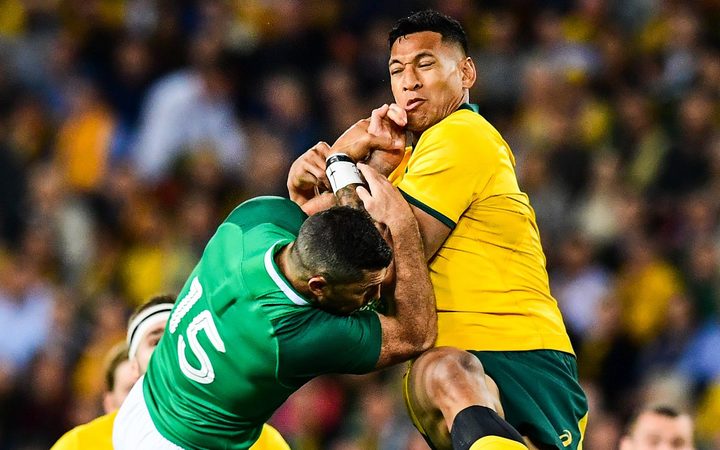 On Wednesday night, Folau posted on social media that gay people would go to "hell" if they did not "repent".

The 30-year-old fullback posted similar comments last year but escaped sanction and signed a new deal with RA through 2022.

Rugby Australia and the Waratahs have made repeated attempts to contact Folau since he posted the comments and they both confirmed their intention is to terminate his contract.

The unprecedented move will throw into disarray Australia coach Michael Cheika's plans for the Rugby World Cup in Japan later this year.

Folau has been all but ever-present in the Wallabies number 15 shirt since switching to rugby union from Australian Rules in 2013 - scoring two tries on his test debut against the British and Irish Lions.

He has scored 35 more tries in 72 tests since and helped Australia to the final of the 2015 World Cup in England, where they were beaten by New Zealand.

An elusive and dangerous runner, Folau helped the Waratahs to the Super Rugby title in 2014 and only last weekend became the highest career try-scorer in the competition when he crossed for his 60th five-pointer.

Folau has had previous lucrative offers to play in Europe and Japan but has stated his desire to remain in Australia makes his most likely destination a move back to rugby league, a code in which he represented Australia at the start of his career.

Raised as a Mormon, Folau moved to a pentecostal church in 2011 and has made no secret of his religious beliefs since.

He was a critic of the proposal to make same-sex marriage legal in Australia before it was passed in 2017 and last year took to Instagram with his first post about gay people being destined for hell.

Castle said then that RA "accepted" his position that he had just been expressing his beliefs and had not intended to "upset people intentionally or bring hurt to the game".

Wednesday's post, which took the form of a meme based on verses from the bible, said gay people and others he perceived to be "living in sin", including "drunks", "idolaters" and "atheists", would be condemned to hell.

The post drew widespread condemnation from around the world with New Zealand Prime Minister Jacinda Ardern among those criticising Folau for the way he was using 'his platform'.

Japan rugby captain Michael Leitch posted a video in Instagram in which he said Folau's comments were "wrong on so many levels" and could be "a real stab in the heart" for people struggling with their mental health.

To @izzyfolau . Hope this reaches you .

The RA and Waratahs statement on Thursday said they wanted rugby to be a sport that unites and welcomes people regardless of their "race, gender, religion or sexuality".

"No language that isolates, divides or insults people based on any of those factors can be tolerated," it said.

Pride in Sport, which works to make Australian sport inclusive for LGBT people, later welcomed the decisive action taken by Castle and Hore.

"This unprecedented course of action sends a strong message of what will and will not be tolerated in rugby and they've made it clear that homophobia and transphobia has no place in the sport," said Andrew Purchas, founder of the Sydney Convicts, Australia's first and most successful gay rugby club.