Ardie Savea scored two sensational long-range tries to help the Hurricanes down the Highlanders 31 to 28 in Dunedin. 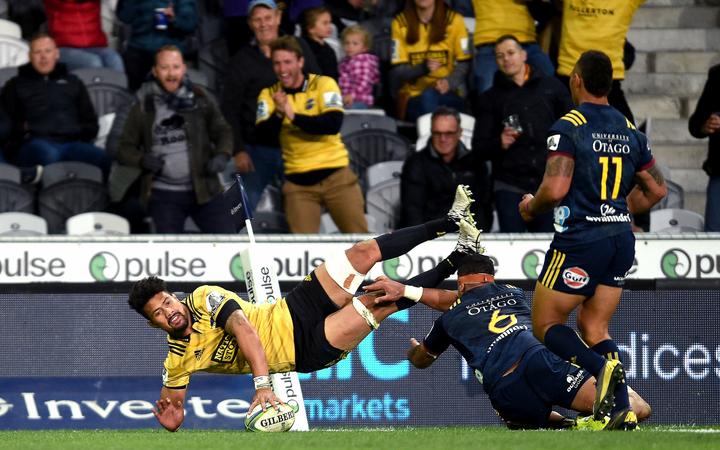 Ardie Savea of the Hurricanes scores a try against the Highlanders Photo: Photosport Ltd 2019 www.photosport.nz

Captain TJ Perenara and Ngani Laumape also scored tries for the Hurricanes, who were guilty of making too many errors and struggled for much of the game in the set piece but managed to score when they needed to sneak to victory.

Shannon Frizell, Ash Dixon, Kayne Hammington, James Lentjes all crossed for the home side, who had numerous attacking lineouts after the fulltime hooter but could not score.

The Highlanders had lost three of their last four games, while their 16 March match against the Canterbury Crusaders was cancelled due to the mosque attacks in Christchurch the previous day.

One of those losses was due to a last minute penalty by Beauden Barrett in Wellington, where their forwards dominated and their defence put pressure on the first five eighth, shutting off his time and space.

The Highlanders again used their forwards and tactical kickers to play inside the Hurricanes' territory, force errors and build phases in an otherwise frenetic first half where the visitors were guilty of poor execution in their set piece.

That pressure led to first half tries to Frizell and replacement hooker Dixon, whose try was controversial with television replays indicating he had lost control of the ball.

The Hurricanes, who had fallen behind to Frizell's 19th-minute try, were able to strike back almost immediately when Perenara exploited a gap close to the line after one of their few sustained buildups.

Dixon's 28th-minute try, however, gave the home side a 14-7 lead, which they looked set to extend on the stroke of halftime only for Savea to intercept a loose pass and sprint away to lock the score at 14-14 at the break.

Barrett kicked the first penalty of the game early in the second half, only for the Highlanders forwards to go up another level and dominate the next 15 minutes with Hammington and Lentjes both crossing to give the home side a 28-17 lead.

Lentjes' try appeared to be the one to seal the game only for Savea to finish off a strong midfield break from Ben Lam and then Laumape jinked his way past three defenders after Barrett had set him up.

The Highlanders had numerous chances to win the game after the fulltime hooter with a succession of attacking lineouts but knocked the ball on to end the match.