The Northern Mystics have scored their first win of the ANZ netball Premiership beating the Waikato Bay of Plenty Magic 54-44 in Auckland. 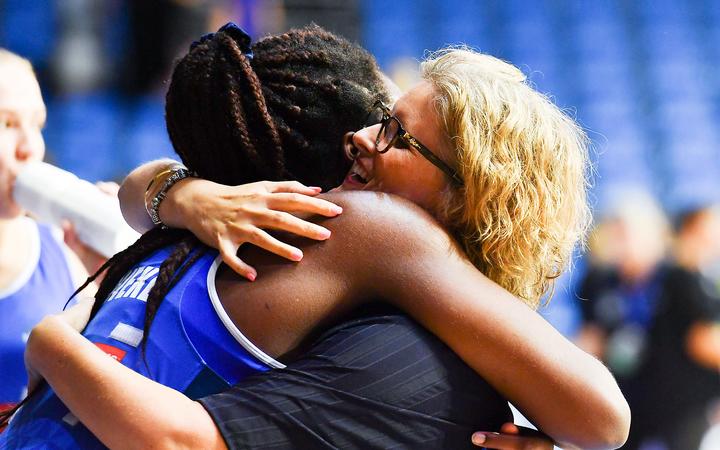 It took six long, frustrating weeks but the Mystics finally got their first win.... they remain bottom of the table, while the Magic are fourth.

Led by their captain Phoenix Karaka in defence, who took home the MVP honours, the Mystics came from nine goals down in the second spell to dominate the last two quarters.

The injection of 17-year-old shooter Grace Nweke, who contributed 33 from her 38 attempts, also played a major hand in the turnaround before a thrilled home crowd.

Despite periods of good attacking netball, the Magic wilted under the heat, and go home with just two wins from their seven matches so far.

From the outset of the encounter, the Mystics made big gains on defence, but they took a little while to find their shooting sweet spots under pressure from the Magic's circle defenders Casey Kopua and Kelly Jury.

With Bailey Mes not missing a shot, the Mystics took the lead halfway through the first quarter.

It was short-lived. Their handling errors and turnovers built up and the Magic capitalised. The relationship between Sam Sinclair, at centre, and shooter Kelsey McPhee grew as the quarter wore on, and the Magic led 15-10 at the first break.

The Magic extended their advantage in the second quarter, with McPhee and Monica Falkner falling into a solid rhythm under the hoop.

Down by nine, the Mystics made a strategic change in their shooting end - with tall schoolgirl Nweke coming on for Jamie Hume, who'd struggled under the close attention of Kopua.

Her injection into the game stimulated the entire Mystics line-up - in particular defenders Karaka and Erena Mikaere who nabbed plenty of ball off the Magic attack. Mes and Nweke didn't let them down at the other end, scoring four in a row to bring the gap back to within six.

Using Nweke's height to full advantage, the Mystics found themselves only four off the pace, 26-22, at halftime.

The Magic buckled under the pressure of the Mystics defence, and both sides were level at 27-all.

But then the pendulum of power began swinging wildly both ways - the Magic scoring the next four goals, before the Mystics potting the next six to finally claim control.

Growing in confidence, Elisapeta Toeava and Earle pulled out all their tricks to thread the ball through to Nweke, and at three-quarter time, the Mystics held the upper-hand, 40-36.

The tension was palpable at the start of the final spell, with players colliding and diving across the floor in desperation to get their hands to every ball.

Six goals down, the Magic launched a fightback, tightening up their defence and scoring five in a row - 21-year-old McPhee staying composed and notching up four of them.

But a steal that could be shared between Karaka and Mikaere turned the tables once more, and the 17-year-old Nweke and Mes made no mistake from there on in, scoring the last seven goals for what turned out to be a comprehensive victory.