The Chiefs have ended their miserable start to the Super Rugby season with an emphatic 56-20 victory over the Bulls in Pretoria, as Damian McKenzie proved the inspiration and captain Brodie Retallick scored two tries. 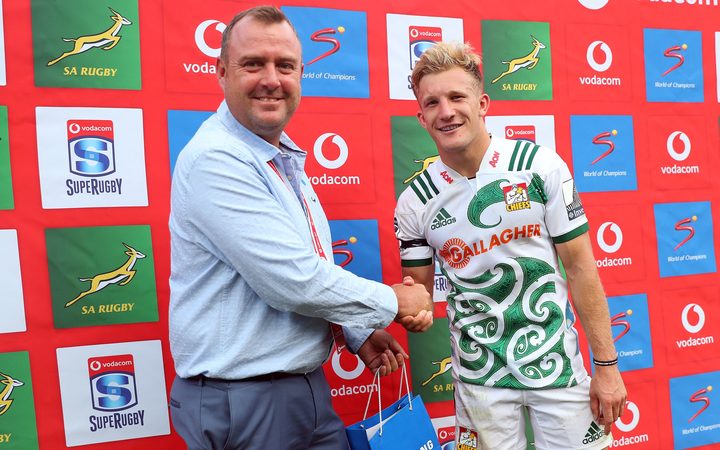 Chiefs fullback Damian McKenzie receives the man of the match award after guiding his side to a resounding 56-20 win over the Bulls in Pretoria Photo: ©Backpagepix 2019

McKenzie's line breaks and relentless probing of a sluggish home defence set up the Hamilton-based side for a first success of the season, having lost their opening four games before drawing last week.

McKenzie kicked 21 points while the Bulls replied with tries from Jesse Kriel and Burger Odendaal and 10 points from the boot of flyhalf Handre Pollard.

Retallick is relieved the Chiefs have opened their account for 2019.

"We came over here looking to play some high tempo rugby. We realised that the Bulls hadn't played a New Zealand team yet so we were trying to keep our skill set high and [play with] high tempo," he said.

"I'm glad we played some good rugby and I'm stoked that we got the first win of the year."

The Chiefs kept up a high tempo despite the altitude and heat at Loftus Versfeld to showcase their fitness levels and belie their lowly status in the standings.

Alaimalo was first to score in the eighth minute as the Chiefs' speed down the line stretched open the Bulls defence.

They were already 17-3 ahead just past the half-hour mark as McKenzie's line break led to Nankivell scoring under the posts, after skilfully picking up a loose ball before going over.

Retallick added a third try just before halftime after a succession of pick and drives eventually breached the Bulls defence.

The halftime break did little to stop their momentum and two minutes into the second half the lead was increased to 31-6 as Retallick again finished off another sweeping move begun by McKenzie, who looks more comfortable at fullback than the pivot role he had played earlier in the season.

McKenzie then kicked through a brilliant bouncing grubber for Nankivell to score his second.

The Bulls got consolation tries in the last 15 minutes through centres Kriel and Odendaal on a sobering afternoon for the Pretoria team and their supporters.

Yet the Chiefs also scored two more with Alaimalo putting the finishing touch to the victory with a try at the end of the game.