The Blues have broken a 20-game drought against a New Zealand side by beating the Highlanders 33 to 26 at Eden Park. 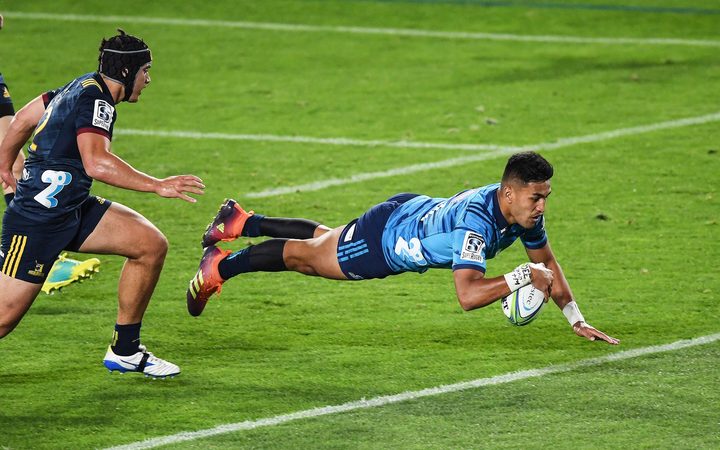 If anyone thought the Blues had forgotten how to win against New Zealand sides, tonight they proved they are back on track.

The Highlanders drew first blood with a penalty kick in the opening minutes but for the first time in an opening quarter this season, All Blacks winger Reiko Ioane broke through the line of Aaron Smith and Dillon Hunt to score for Auckland in arguably one of best individual efforts of the season so far.

In an error-riddled opening where penalties were dominating, Ioane showed he wasn't done yet dotting down for a second time for his sixth try of the season giving his side a 13-10 lead.

The Highlanders answered after 18 minutes with a try of their own, but missing their own tackles was their Achilles heel this half.

The Blues started the second half with clear intent only for an attempt at try to be denied after a forward pass ruling at the hand of Melani Nanai foils plans.

With the score at 15-13 to the Blues the Highlanders strip Ma'a Nonu (in for Sonny Bill-Williams) of the ball to win a penalty. Highlanders' Marty Banks lands the kick earning his side a 16-15 lead, but errors will soon curse the visitors again with the Blues picking up a cheap penalty and from 40 meters out and Harry Plummer makes them pay by stealing the lead.

The glory was short lived after an aimless kick by the Blues number 10 led to Tevita Li scoring a try for the Highlanders, Banks nailing the kick to tip the scales their way 23 to 18.

At this point, Plummer is swiftly replaced by Maori All Black Otere Black.

Some brilliance by midfielder T J Faiane to bust through was supported by Nanai to even the score 23-all, Black though producing a coach-killer by falling just short of the conversion.

The Blues loose forward Akira Ioane starts to make his presence known in defence in an incredible show of strength to keep Shannon Frizell held up to create the maul and win a Blues turn over, only for the Highlanders bite back again.

A full eight-man shove pushes the Blues off the ball and Highlanders pick up a penalty in front of the posts, and Banks doesn't fail to deliver the score now 26 to 23.

With the Blues on the fly, the referee soon stops play to review a tackle on Tom Robinson by Waisake Naholo, the TMO ruling a dangerous tackle resulting in a yellow card for the winger.

The final ten minutes descends on the match and Nonu and the Ioane brothers are starting to look dangerous.

Only centimetres away from the line Akira Ioane first stretches for the line for it not to be, it's captain Patrick Tuipulotu that crosses on the next attempt and Black converts to take the Blues to a 30 to 26 lead with five minutes remaining.

With momentum clearly on their side, Karl Tu'inukuafe comes off the bench to make an impact by winning a crucial penalty in the scrum Black claps his hands in delight after seeing the points through Blues now leading 33 to 26.

The Highlanders have one last chance to draw the game with a scrum feed 43 metres out from the Blues line, but the pressure overwhelms the Highlanders and Jackson Hemopo drops the ball to hand the win to the home side.

The Blues winning their first win over a fellow New Zealand side for the first time since round one of 2016, that team being the Highlanders three ago as well.

"It's good for our confidence, obviously we haven't beaten a New Zealand team in a while and it's good to get that monkey off our back" says Blues forward Blake Gibson

"Thursday Friday we trained bloody hard and out there tonight as you could see we were more clinical."

"We can get much better, we let them back in at time off the back of our own mistakes… we had four All Blacks off the bench and they added especially at scrum time."