Super Rugby will return to a 14-team full round-robin competition in 2021, with Japanese side the Sunwolves to no longer be involved after next season. 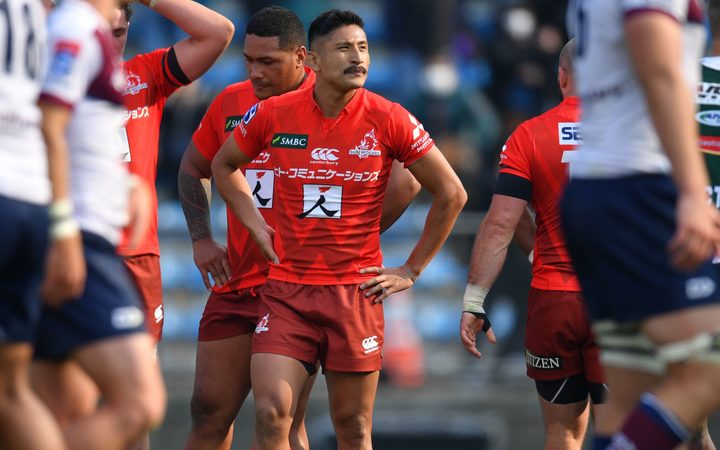 Sunwolves player Keisuke Uchida during their loss to the Reds in Tokyo. Photo: AFLO SPORT/Photosport

Confirming wide-ranging reports of the Sunwolves' axing during the past two days, governing body Sanzaar announced on Friday the team was set to exit the 15-team competition.

As expected, the statement advised Super Rugby would return to a 14-team full round-robin format from 2021.

Sanzaar chief executive Andy Marinos said the decision came after an 18-month review process and was not taken lightly.

"It has involved some detailed analysis and a thorough review of the current and future rugby landscape, tournament costs, commercial and broadcast considerations and player welfare in line with our Strategic Plan.

"Competition integrity, affordability and a competitive playing environment were further key drivers to ensure that an optimal player development pathway remains in place to feed into international rugby."

Reports of the Sunwolves departure said they had refused to pay a participation fee, a stipulation which was placed on them but no other team.

While not speaking directly to those reports, Marinos said Sanzaar was advised by the Japan Rugby Football Union (JRFU) in early March they would no longer be in a position to financially underwrite the Sunwolves future participation post 2020.

"The future of the Sunwolves will now be determined by the JRFU which has determined that Super Rugby no longer remains the best pathway for the development of players for the national team.

"However, Japan and the Asia Pacific region remain strategically important to Sanzaar. We will continue to work with the JRFU, Japan Super Rugby Association (JSRA) and other stakeholders, as we have done throughout this review process, to establish a truly professional league structure in Japan in which current and potentially new teams could participate."

Marinos confirmed Sanzaar had presented options to the JRFU around the establishment of a Super Rugby Asia-Pacific competition structure including Japan, the Pacific Islands, North and South America and Hong Kong.

"The concept includes linking high performance programmes of such nations into the potential competition structure," he said.

"The aim is to deliver a competitive and sustainable international pathway that can align to both current and future considerations around the international calendar."

The new Super Rugby format will include one difference from the last time the competition included 14 teams, in 2010.

Rather than straight semifinals involving the top four teams, the top six sides will qualify for the playoffs.

The top two teams will get a bye in week one, before hosting the winners of the week one matches in the semifinals. 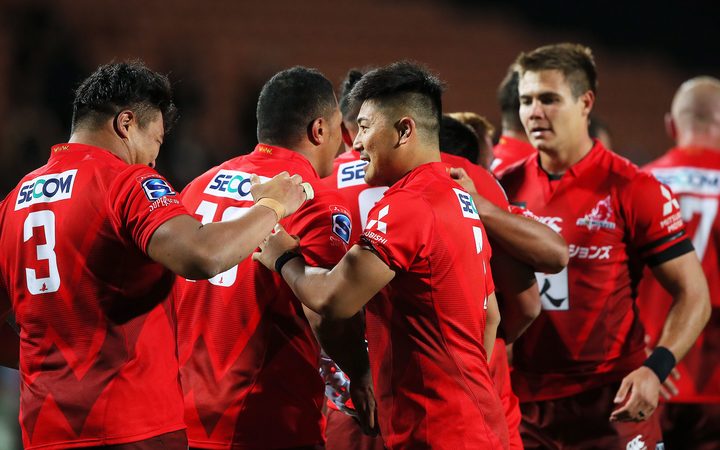 The Sunwolves celebrate their upset win over the Chiefs in Hamilton. Photo: Photosport

The Sunwolves joined Super Rugby in 2016 and have won just seven of the 43 matches they have played since but this year they have looked a much improved side.

After pushing the Waratahs, they knocked over the Chiefs in comprehensive fashion before making the Blues work hard for what was the Auckland-based team's first win of the season.

The Japanese outfit led by 16 points at halftime before being pipped 34-31 by the Reds in Tokyo last weekend.

"They've been put together quickly [but] they've been really competitive.

"But then again Super Rugby is in a changing landscape, as is world rugby at the moment, so I can understand where that thought comes from.

"What the competitions are going to look like in the next couple of years who knows, it's a bit of a moving beast at the moment."